Can you guess why my new nickname is "Bullfrog?"
Posted by Miranda Tomenson at 8:38 PM No comments:

Fighting my injury...1 week at a time 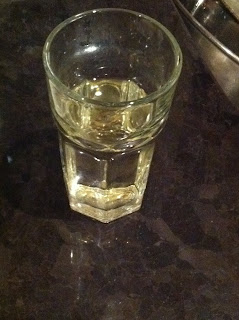 Anyway...so I'm still unable to run since my epic 25km training run on Feb 20th...the problem started below my kneecap until 15km into my Family Day run I felt it in the side of my knee...I basically fought through the pain for the remaining 10km and since then have barely been able to get in any good training. At first it appeared my fibula was stuck, then my ankle was stuck and then my pelvic bone...but still...nothing has helped my knee. This past week I couldn't even bike or swim without pain. Of course the ultrasound results were supposed to only take 1-2 days to get to my doctor...but of course, they are taking longer so I am still waiting to find out the exact problem. 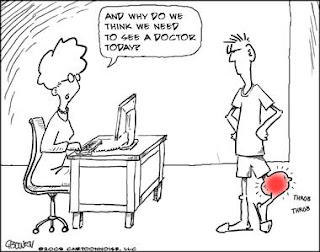 This week I did get to try a few new things.

#1 - Get a manicure for no reason. I had 2 hours to kill after being told that "NO, I WAS NOT ALLOWED TO BIKE TODAY" so I wandered into a Nail Salon in Leaside thinking about getting a pedicure. However, after being told by the lady at the spa that my toes were too rotten to be polished I opted for the manicure option. (spa lady: "you a runner?" me: "yes, sorry my toenails are black and blue, that's why they need polish" spa lady: "too rotten for polish" me: "*sigh*"). An hour later my nails were nicely painted a pale red/dark pink...fabulous. I was looking good and feeling good!! Until about 2 minutes later when I managed to take a nice little chunk of polish of my right thumbnail. oops. two days later...nails are decorated with bike grease and are becoming even more chipped by the hour as I move bikes up and down stairs and set them up on trainers....ahhh...there was a reason I hadn't had a manicure since my wedding!

#2 - Yoga (not a new thing, but it has been awhile). I was determined to get to this 9:30am yoga class at Fireflow Yoga. Shareen (www.manayoga.com) is the best Yoga teacher ever and I knew that nothing would ease my stresses like one of her classes (plus she has been telling me forever that it would be so good to compliment my training). So I raced over to Yonge/Eglinton in rush hour (all the way from the Beach)...it "only" took me an hour and I barely made it in time...only to realize that, duh, she was away in Ottawa coaching swimming (which of course I know, because we coach the same swim group!). Anyway, Jonathan led the class and it was still excellent. All the lunges and various stretches were a perfect compliment to all the forward movement I do on the swim, bike and run. It wasn't even too hard! (well, so I thought!!! until...but almost 72 hours later my shoulders are still sore). Next class is planned for Sunday, 4pm. Hopefully I will be recovered by then.

#3 - Making tacos. Yup, I had a craving for sour cream and minced meat...odd, yes, but the perfect excuse to make tacos for the first time! I even had the extra time needed to go grocery shopping for the necessary ingredients. Making tacos are surprisingly cheap...taco kit= $2.99, sour cream = $2.99, minced meat= $4.99, and cheddar cheese, salsa were already in the house. AND Rikki loves Mexican!!!

So 3 new things...what will I try next week?

Once last thing to write about...

The best thing to come home to on a Friday night is a yummy dinner with family and friends! After a hard week....injury fighting, dealing with lack-of-training anxiety, no sleep (due to lack-of-training anxiety) I came home after work to the smell of amazing food and the sound of laughing and banter from the sisters, the fellas, mamma, papa, cathy and norm. Of course, everyone was dressed in their Friday work casual-formal attire (Tom was even wearing a tie!) ... so of course I fit right in in my work clothes (spandex and lycra!). At least I was comfy :) Dinner consisted of a shrimp appetizer, steak, peas, potatoes... and of course Santa Margherita (no judgement...I'm not in heavy training at the moment...a plus to being injured?) 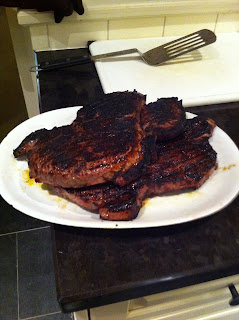 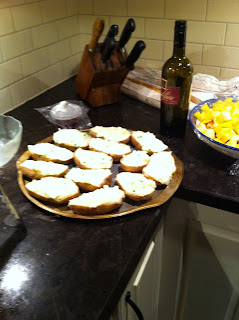 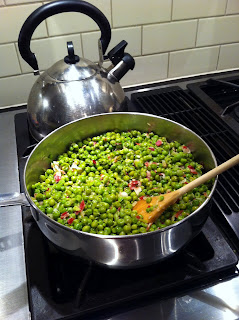 I made dessert...fruit salad...I would much prefer cake or ice cream, but unfortunately I don't need those yummy calories right now. 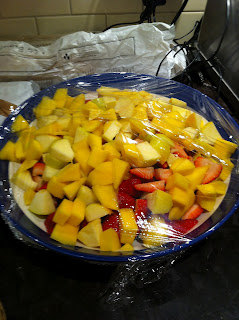 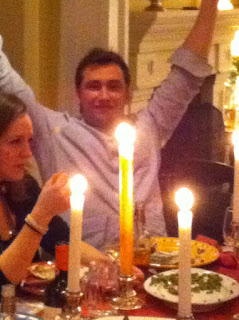 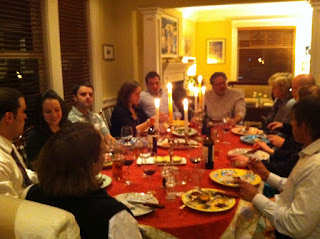 The night ended for me at 10pm...when I headed off to bed listening to the faint sounds of laughter and Norm and Papa playing guitar downstairs. For the first time the whole week I had a good nights sleep.
Posted by Miranda Tomenson at 5:29 PM 1 comment: