I am excited to say that my first official race of the season was successful. I was a beautiful, sunny day, just a light wind, and the perfect running temperature! What more could a runner ask for? The day started off just before 6am. I had gone to bed at 8pm the night before and was feeling great! I hopped out of bed to start getting ready. Unfortunately, Rikki had not been able to sleep. Add this to the fact that he is not a morning person at all and you get a very cranky Rikki. The best way to deal with this situation may not have been for me to poke and prod at his head and say in a high squeaky voice "Honey...honey...honey...time to get up!" For next time, and some advice if anyone has ever been in this situation: go downstairs, brew an amazing cup of coffee, come back upstairs and hold it under his nose. Had this have been the approach I used I probably would have been more successful at getting him out of bed in a good mood. Anyway, so by 6:15am we were on the road. I plugged in the address of the race site into the GPS...ETA 7:23am...at this point Rikki (who still had not had his coffee) said, "the race starts at 9:15! why do we have to be their so early?" to which I replied "I need time to get ready." Now, if you know me, you know that I only need about 15 minutes after a workout to get changed, hair blow-dried, makeup on (when I wear it) and go out. However, when it comes to pre-race its a completely different story and I do not like to rush. Luckily, Rikki got his coffee before he was able to argue with me for too long on this one. 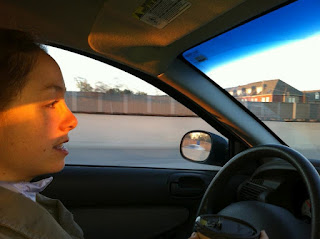 After parking the car, getting to the race site, picking up our race kits it was around 8:15am. It was pretty warm in the sun and I decided on what clothing I would keep on for the race. My running room hat, gloves and friction free socks were a must, my wave precision 12 running shoes (best shoes ever: cushioned & lightweight for racing!), lululemon long sleeved top with my race shirt over top and lululemon running tights. The race was at a beautiful location - Port Dalhousie. So we had a nice (romantic?) walk along the pier and I did some running drills and Rikki took some photos. A nice relaxing pre-race routine. Maybe we could have slept in for another 30 minutes...I guess I am just used to triathlons and having to set up a transition area... 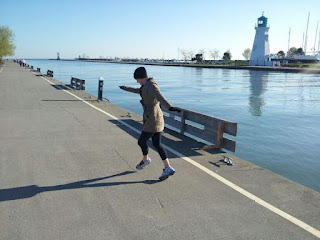 OK, getting to the actual race. It was a small, local race so there wasn't too many people. I think probably around 600-700 participants in total and just over 260 people in the 10 miler. All this just to say that the start wasn't too crowded and from the very beginning I started out in 3rd place over-all. It was a pretty technical course as it was mostly on a dirt/gravel trail with lots of turns. You were either going up or down a hill almost the whole time. This made it tough to get into a groove and as a result I don't think it was a particularly fast course. However, it was still a lot of fun. I stayed within about 100-200 meters of the 2 guys ahead of me until the 8km turnaround. I think I split just over 32 minutes for the first half of the race. I would have liked to have been under 32, but given the terrain of the course I was pretty happy with this. After the turnaround to the 11km mark was amazing. I couldn't see the two race leaders anymore, but so many people were cheering for me and this really was inspiring! I tried to cheer for all of them...they were so supportive and I wanted to be equally so. I was really having a lot of fun. The race got a little bit more challenging from the 11km to the finish line though. The trail was a bit more crowded from all the people doing the 5 & 10km race and I spent more time trying to dodge them than I did focussing on my time. I think I may have scared Rikki as I whacked him on the back as I passed. The look on his face was not a happy one and I knew that he was probably not liking the hills on the course too much. Add fatigue to trying not to run into people (and I am so so so sorry to the person I did run into) and my back half of the race was about 30s slower than my first half. Overall time of 1:04:36 (1st female, 3rd overall participant). I was definitely happy with my result...but I have a long way to go if I want to run a sub-1:25 half-marathon off the bike in order to finish with the other Pros!! 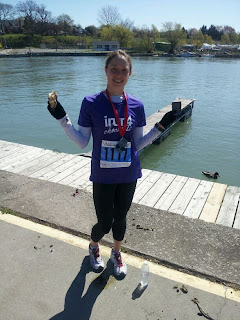 A little bit more info about the race: This happened to be called THE CHOCOLATE RACE (http://www.thechocolaterace.com/ ) and it was unlike any other race I have done...they had chocolate covered strawberries and marshmellows at the aid stations and chocolate croissants, truffles, chocolate milk, etc. at the finish line. I would highly recommend it to any chocolate lover! However, maybe pocket the chocolate at the aid stations...Rikki told me that eating chocolate while running was not a good idea. 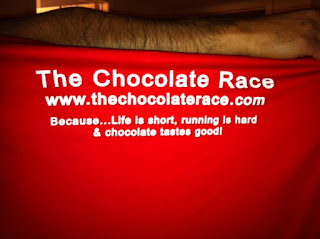 Now a little mini-break from training! I am off to Mexico for my beautiful sister's wedding in MEXICO! ~ Miranda
Posted by Miranda Tomenson at 6:43 PM No comments:

It's been awhile since I have posted and these race reports are long overdue (at least the St. Pats 5K one). As you may or may not know my running was sidelined after a 25km run at the end of February...a Family Day run I will not forget...awesome and agonizing run at the same time! Due to running that distance with a "stuck fibula" caused inflammation in my knee. My chiro explained to me that the IT band rubs over a fat pad that sits on top of the head of the fibula. This inflammation was felt during swimming, biking and running. Thanks to constant care from my chiro and RMT I was able to keep cycling and swimming, but not able to run or do weights. Starting the week of March 9th I slowly started running again, 15mins, day off, 20 mines, day off, ...etc. March 16th I did a 30min run with no pain so my coach decided I should run the St. Pats 5K race...since I was already registered (I had planned to run it slow and with Rikki). He told me hold 4min/km...and in my mind I was thinking (WHAT!?! My PB is only a 19:27..so basically I need to race it). Come race day I was feeling OK, but highly doubted I could hold 4min/km since I had only run 4 times in the past month (2hrs total) and all those runs were at 5min/km pace! Anyway, the race started and all these women past me at the start. Oh well, I thought, this is expected...and I kept a pace that was just below what I thought was 5km effort (HR of abour 175bpm). At the 1km mark I looked down at my split...WOW-3:40! And it was an easy 3:40...I kept up that just below 5km effort (my GPS watch was going a bit crazy at this point...saying I was on 2:22/km pace. ya, right!) and started to pass a few women. At the 2.5km turnaround I passed some YorkU track runners. That was when I picked up my pace to actual 5K race effort. No way was I letting them re-pass me. GPS watch was still going crazy for the rest of the race, so I just tried to keep my pace up. I kept passing people throughout the rest of the race...ya, I'm definitely an endurance runner! Not going to lie, the last 500m of the race I was definitely feeling the lack of training and my heart rate was soaring (into the 190s!), but soon I was passed the finish line in a new PB of 18:49!!! woohoo...with NO INTENSITY TRAINING! this was a good start to the season for sure. The only problem was that I would have to tell Adam that I had not followed his training plan AGAIN. Shoot. 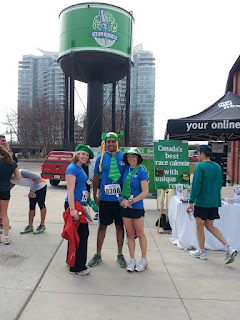 I also wanted to mention some other highlights from the meet: Katie Osbourne won something like 9 medals (I think all were gold for her individual events), the 4x50 mixed medley relay (Sean, Henry, Sue, Katie) were 0.50 seconds of a record! Andrea St. Jules rocked the 100 and 200fly and beat her seed time significantly! Mike swam a 1:05 100m fly (gold medal) after literally arriving at the pool deck 3 heats before his race, still in his jeans and with no suit on. Sean swam a 30s 50m backstroke, beating his time from his last provincials by a second (this is HUGE in a 50m race!). Mel swam 20:50 in the 1500, which is almost as fast as her pre-2nd baby swim in London 2 years ago...she also had many other fast swims and medals! Karen swam to bronze in the 50fly, silver in the 50 and 100 back, 200 fly and and gold in the 100fly and 200 back. How many medals was that?! Awesome. Other medallists were Chris, Kelly, Jon, Mark, Henry, Sarah F, Nicola Tory, Shareen and sorry if I forgot anyone else!!!
Posted by Miranda Tomenson at 10:45 AM No comments: