On Saturday, July 15th I raced the Gravenhurst Olympic for the first time! As an event known to sell out well in advance of race day, I knew that it would be an awesome event. I was not disappointed. The location, the course, the event organizers,volunteers and so many spectators made it such a great race. It really enjoyed racing alongside new du/triathletes, elite du/triathletes, both young and old (there was an 85year old participant this year!). I got to see people I hadn't seen in awhile and I got to meet new people.

Although I am training for the full Ironman in Mont Tremblant on August 20th, there is HUGE benefit to racing some shorter races in preparation. The shorter and harder workouts allows you to train your anaerobic energy system and help make your aerobic system more efficient and the longer easier workouts build your endurance. Both are required to put together a good Ironman. So, that, and the fact I love to race, was why I included Gravenhurst in my race schedule.

The weekend prior to Gravenhurst I had put together a solid training weekend: a 170km ride + 11km run off the bike (Saturday) and then swimming the relay in Muskoka 70.3 and then running 29km (Sunday). I had a bit of a rest week this past week, but did a 140km ride + 12km run (with 2x2k at 4:15/km) on the Wednesday. So, my legs were a little tired. I was hopeful that a day off and a massage on Thursday night and a light day Friday might get my legs ready to be fresh on Saturday. Unfortunately, I worked at the massage clinic until 8pm the day prior to the race (5 hrs on my feet) and then didn't get to where we were staying in Severn Bridge until 10:30pm that night. So, I would be racing Gravenhurst on less than 7hrs sleep. Not something I like to do! Nonetheless, I was excited and was hopeful that the lack of sleep would only start to hit me later in the day on Saturday well after the race was over.

Luckily, or unluckily, for the pros and elite age group athletes we got our own boat ride to the start line. It was nice to be on a private boat, but I was a tiny bit disappointed we wouldn't get to jump off the steam ship. It sounded like those who did had a lot of fun! The start of the race was fairly uneventful as there were only about 8 people in my wave. Jessey The Elf took off way ahead of us, but Daniel Clark and I managed to swim together. I tried to pass him a few times but I need glasses for distance and even with my mirrored goggles I could not see where I was going. So, I hoped he knew where he was going, and I just followed him to the finish! I felt like I was pushing myself, but didn't have much extra energy to go one gear harder, which I sometimes have on race day. 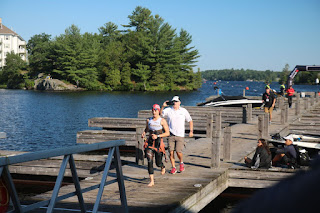 After what seemed like a long run from the swim to my bike, I had a relatively uneventful T1 and before I knew it I was off on my bike. I used to dread the bike portion of the race, but I actually enjoy it now with my Cervelo P5 and Blade Carbon Wheels! About 500m ahead of me was another athlete, and I made it my goal to keep him in sight. I knew roughly what my average power should be for this race (205-215W) and where my heart rate should be (165-170bpm) and while both were a bit higher than that in the start, I felt OK so I continued to aim for my "carrot" up the road. I wasn't making up the gap on the rider in front, but I wasn't falling behind, which is usually what I let happen. My legs were starting to hurt at around 15K in and it wasn't as easy to ride at 215W as it had been at the start. I also got passed by two riders which hurt, mentally. So I focused inward, as is what I do when things happen that I can't control. I watched my cadence steady at around 85-87rpm, aimed for a power goal between 205 - 215W, took my fluid and my nutrition. At the 20K turnaround I was at 211W NP and around 169bpm. I continued to focus inward for the next 10km and wouldn't you know it, I caught that rider up ahead! We caught and passed each other several times, before I took the lead for good. I died a little in the last 5km and finished the ride at 206W NP.

Oh, and let me just say this, that when you are training for Ironman, 40km goes by so fast!!! I have done 3x 140-170km rides and 2x 120km rides in the past three weeks. So, although 40km at just below threshold power/heart rate is VERY hard it definitely went by quickly. Also, I really liked the course - rolling hills are my specialty.

I think I was starting to feel the busy week and lack of sleep as the run started. I really wanted to average 4:10 to 4:15/km, but it was evident early on that I wasn't going to reach my goal. I was finding it hard to push myself to go fast. I took some calories and some water at the first aid station and that seemed to help. The course is pretty tough with lots of steep climbs and descents and it makes it hard to pace it. So, instead of worrying about pace, I stayed focused on heart rate and keeping it in 172-177bpm range (threshold heart rate range). My legs were pretty heavy by the end but I tried to stay strong to the finish! It was great to break the tape to take the overall female win and be welcomed by John Salt (the race and series director). 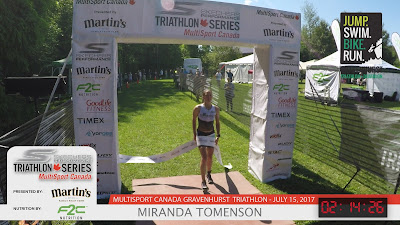 So that was the day in Gravenhurst! Unfortunately, I did re-aggravate my sesamoid bone in my left big toe, likely during the long run barefoot during T1. I'm hoping the inflammation clears up in the next few days, as I have my last big training weekend planned. 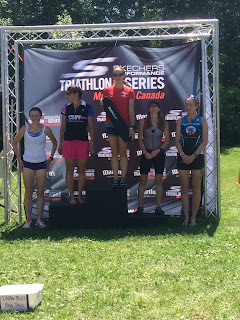 Next race up: Kingston Long Course Triathlon (I hope to see you there!)

- Bill and Lynne for letting us stay at their home in Severn Bridge
- The Multisport crew, volunteers and officials
- My parents for their continued love and support throughout this crazy adventure of mine.
- My sisters for being my inspiration to work hard and never give up.
- Adam for keeping me calm when I get anxious and for making me want to be the best version of myself. It helps so much to have him there on race day.
- My step-kids: Saige, Rhys and Mack for being there on race day, cheering me on and for the high fives!
- My health care team of Dr. Mark Schofield, David Lamy (RMT), Bill Wells (Chiro) and Michael Hong (Acupuncture). I wouldn't have been able to race this one without you.
- Kim Lumsdon at KLSC
- All my readers for their support and for following me in my triathlon endeavours
- Fellow athletes at the race and training partners, especially Sara and everyone at WattsUp and TTC!
- Endurosport for building me the perfect bike and all your mechanical help
- My sponsors: Title Sponsor:High Rock Capital Management, WattsUp Cycling, MultiSport Canada, Blade Wheels, The Urban Athlete, Fitt1st Bike Fitting

Posted by Miranda Tomenson at 9:17 AM No comments: