Race one of two 70.3s in two weekends has come and gone. As with every race that lasts as long as a half ironman, it was a mix of many ups and downs. Every time I race I want it to be the perfect day, but it's never going to happen with so many uncontrollable variables. The sport alone consists of 3 disciplines. It's one thing to aim for a peak performance in one on a given day, but for 3? That's even harder. Then there's everything else that could go wrong: losing a water bottle, mechanical issues on the bike, someone racking their bike on yours in transition, blisters, wind, heat, rain, etc. But there is one thing that you can always control if your try, and that's your mindset. Having a positive attitude no matter what happens (because no race is perfect) can turn your day around and lead to a successful race. This is what I learned in Steelhead.

Leading up to this race, Adam and I decided on an easier than normal taper. This was due to the fact that I was a bit more fatigued than usual a week away from the race and the fact that my knee was STILL somewhat painful. So I did very little biking and no running. Usually the week leading up to the race has 3 hour long bike sessions with intensity mixed in, and lots of brick runs. Out of necessity that was not possible this time.

Steelhead is a beach start, which puts me at somewhat of a disadvantage (as most short people will understand!). It is just much harder to run in water when it's up to your quads and not your shins! I had a choice: dolphin dive in very shallow water or TRY to run! I opted for running at first and was quickly in last place. Dolphin dives it was! Or, I should say, face plant into the sand it was! Oops! I finally found something that worked: just swim. I was still at the back of the pack when we reached deeper water. But, luckily, fellow Pro Cait Snow was also close by at that point. So I used her to guide me back to the front of the pack. The swim was pretty uneventful after that. I stuck on Cait's feet the whole swim. I did try to pass her, but I would just ended up swimming beside her and not ahead, so I decided to save some energy and draft. It was comforting to know that I could swim with her, as she was over a minute ahead of me after the swim in Eagleman. I felt my swim had improved since I started training with Bob Hayes at Somerville, in combination with the U of T tri club. This was proof of that. My knee did start to bother me about 3/4 of the way through the swim, however. So I stopped kicking very hard with the left leg. A bit awkward and worrisome. Once we hit the sand at the swim exit I knew it would test the knee. I was able to run just fine through 200m of beach though so that gave me good piece of mind. 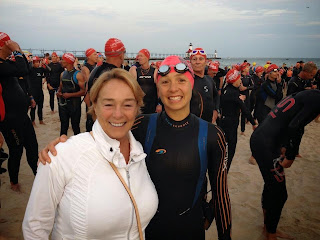 Mamma is the best! 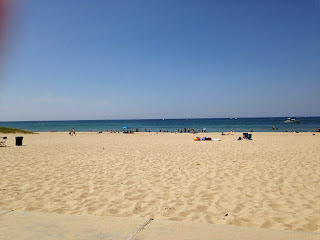 Looks like a nice beach, not when you are running through it!

After what felt like a long transition I was finally off and on my bike. I expected the legs to feel great and refreshed after such an easy week. Normally they feel pretty good at the start of a race. This didn't seem to be the case today. I felt like I was cycling through sludge from the very beginning. I did my best to stay positive, but it was hard. I couldn't help but think, "if it's this hard right now, how hard is it going to be at 60,70,80 and 90k?" The next series of events didn't help: getting passed quite easily by two other girls early on, my power meter reading wrong (it said I was at around 20-40W throughout most of the course, but I didn't feel THAT bad), the super bumpy Hagar Shore Rd, a calf cramp that forced me to stop pedaling and stand up on my bike to stretch it out several times in the last 30km...getting passed again at 85km and feeling deflated enough to ride the last 5km easy into transition. I had never felt so tired at the end of a ride and I thought about giving up. I just didn't understand how I could have felt so weak. How could my ride be almost 10 minutes slower than in last year's race? I questioned everything: my training, my equipment, my nutrition, my attitude leading up to the race. Mentally I was diving into a dark and unpleasant place. 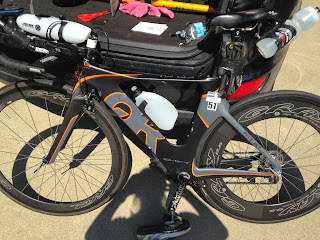 A combination of seeing my parents and having a pretty quick transition boosted my spirits a little at the start of the run. This was enough to get me out of my dark hole. That, and I could see the fifth place female just up the road. It looked like she was gaining on me, but I refused to let her. I pushed hard up the 3km uphill run right out of transition always looking down the road at the "carrot" ahead of me. The race operations director, Tom (an awesome guy!), was at aid station one telling me I looked good and relaxed. Then I saw my parents at the top of the hill ringing their cowbells and cheering loudly. I can never smile at the start of the run, though. It's still too soon to tell whether it's going to be an ok run or a complete sufferfest. I acknowledged they were there but kept focused on my goal to make it into fifth. Sooner than expected, I did! The race wasn't over though. I had 16km to go. And I couldn't even run downhill properly because my knee had started to bother me. So, I cautiously ran the rest of the race. I managed to find a good rhythm at km 8, I smiled at my parents when I saw them on the second loop of the run, took in my water and nutrition (it was a HOT day!) and counted down the kms. After what seemed like forever I crossed the finish line in the final podium spot. 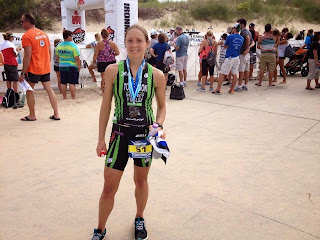 It was mind vs body today, and my mind got me through!

I am still unsure of why I had such a tough day on the bike. I had slept and ate well in the 3 days prior to the race, I felt completely at home at my homestay with Loretta, Mike and the dogs and I had an awesome cheering section. My conclusion was that my taper must've been TOO EASY. Probably good to ensure that I had topped up glycogen stores and was injury free for the race, but since it lacked intensity it's possible that my legs were just not primed for a 200W 90km ride. It will be interesting to see how next week's Ironman 70.3 in New Hampshire will go! 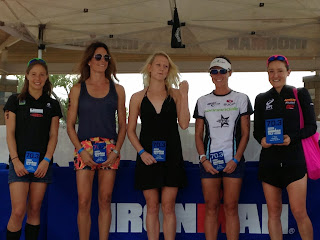 Happy to be on the podium with these fast ladies! 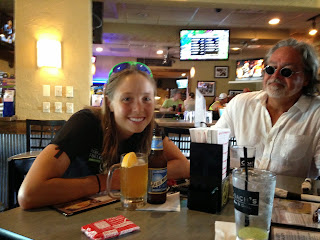 Special thank you to:

1. The family I stayed with in Benton Harbor. Loretta and Mike and their dogs made me feel right at home.

2. My parents, who were able to make it down for the race, again! I don't know what I would do without them. (Sorry for making you cry with worry when I passed during the run, Mamma!)

3. My friends, family and fellow triathletes for your ongoing messages of support! And Triathlon Magazine Canada for the write up in their post-race recap! And coaches Adam and Kevin for helping me to get me back on track with my running after my knee injury.