This past weekend I won Ironman 70.3 Muskoka. Since stepping down as a Professional Triathlete, due to actually having to work for a living :), I've really struggled with balancing life and triathlon. It's taken awhile to realize what the right balance is. My work hours shot up to 60-70 hours a week some weeks as I did what was necessary to support myself and my family. Trying to train to the level I had before was impossible, recovery was neglected, sleep was compromised, nutrition was de-prioritized. There just wasn't time. I still managed good results, but was constantly disappointed I wasn't as fast as I was before. This year I've really tried to figure it all out. With the help of a few great people, training partners and friends I think I am back on track and my fitness is better than it has been in the past 5 years. I still work a lot but less than I used to, I train a little bit more, I don't sleep enough - but am trying to, I've improved my nutrition and spent a lot of time on injury prevention. It's the small changes that add up. 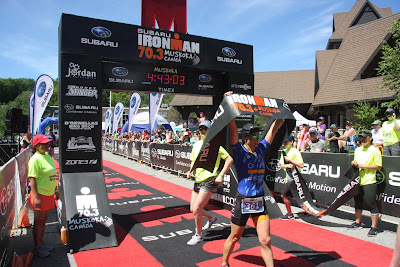 I've now had a few days to reflect on the lead up and the race this past weekend. I thought I would write a race recap (it's been awhile since I posted), as I learned some valuable lessons from this race that I thought might be useful to share. Before I get into the details, I just want to start with a few thank yous. I am so thankful for the Ironman crew for working tirelessly to put on a great event, the volunteers who make these races possible and who were so incredibly enthusiastic on the day - especially the cyclist who rode with me through the tough 21.1km run course, my athletes from TTC and Tomenson Performance & Wellness who cheered on the day (and motivate and inspire me every single day), Kevin McCormick's family for cheering so loud and accepting sweaty high fives!, the One Capital crew for supporting me at this event, all the spectators, Tara from HEAL (because I've listened to her Nutrition talks so many times all her advice has really changed my life) and especially my friends and family for their endless support (friend/family support really is the backbone for most athlete's success, without this, an athlete can't reach his/her potential). To elaborate on this a little, I want to emphasize how important it has been that Adam has given me his full support. He has said "triathlon will always be your true love", which is true - it is what I feel is my purpose in life, the reason I love to get up (super early every day) and what makes me feel special. I'm not saying this is a good or bad thing, but I know that to downplay my passion for triathlon would be to change who I truly am. Adam, my family and friends accept, appreciate and respect this about me, which makes me feel so incredibly lucky and I wouldn't be the triathlete, coach, RMT, step-mum, person that I am without this.

PRE-RACE: The race weekend started early, well, actually a little later than planned on Friday. Adam and I had a leisurely drive up north, listened to a few inspirational podcasts, stopped at Weber's for burgers and arrived to check in at 3pm. Then headed to the One Capital team cottage. This weekend I was lucky enough to be part of the One Capital team of elite athletes that also consisted of Alex B, Larry O, Don M, Colleen and Michael. All of us finished in the top 10 in our age groups, except Michael who had knee surgery 3 months ago and just did the swim-bike (also, pretty amazing he could do that!) The cottage was huge and on Fairy Lake. The rest of the day I spent relaxing, while Adam biked, and we had an early night. Saturday morning I woke up a little later than usual (5:30am!) and had my morning breakfast of homemade oatmeal+blueberry bread + coffee while I reviewed athlete programs and answered emails. Then Adam and I did a bike ride and I did a run. During the ride, my chain dropped, which is very rare for me, and I got a bit worried. However, it was fine the rest of the ride so that eased my nerves a bit. I felt really good. I hadn't done a lot of Ironman 70.3 effort rides and runs. In fact, my longest run in the previous 3.5 weeks was 16km. Most of my training was long/slow swims and bikes, with some short races mixed in for above Ironman 70.3 intensity. I know that my best racing is done when I'm training more (not everyone is like me and can get pretty fit with short/intense workouts, but I do best with over-distance training). The rest I had taken the past 10 days seemed to have me pretty fresh. The rest of the day went fairly smoothly. I checked my bike (got the best spot for my AG), led my TPW athletes & friends through a swim up the river, attended the race briefing, gave a pre-race chat to TTC. The only drama was when I realized that my bike was no longer in the spot I left it in, the gears had been changed and the rear tire was flat. Adam kept me calm, took the wheel to D'Ornellas and had them change the flat and check the tire. D'Ornellas ruled out the tire had exploded from the heat so this had me a bit paranoid that someone was trying to sabotage my race (another explanation is that the bike had fallen and someone picked it up and re-racked it). Either way, I decided to rack my bike in a different age group over night. Next, I went home, made dinner for the One Capital team and had an early night to bed. Unfortunately, it was a restless sleep with my mind wandering to the mysterious issue of my bike and being worried about another mechanical during the race. 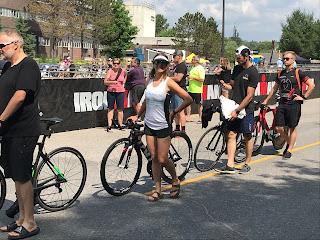 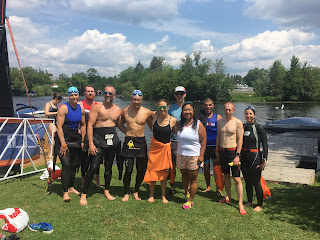 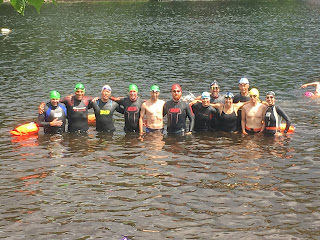 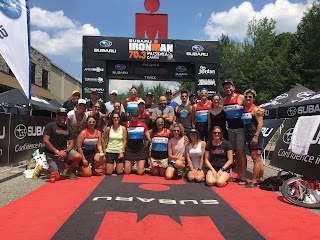 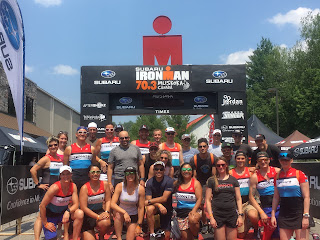 THE RACE: I had an uneventful race prep. I re-racked my bike in my age group rack, in one of the worst spots to remain inconspicuous, even though Laura Beatty offered to give me her spot (thank you Laura!). I got in a good warmup and was ready to go for the swim. When the swim started I fell back a bit (wish I had some speed!), but then saw that the gap between myself and the third place swimmer wasn't big and it didn't grow. I worked hard to get up to that swimmer and he led me the whole way through the swim. I found it quite easy to navigate the river after having swum it so many times. I knew where the turns were and where the swim exit would be. I swam a 26:59 by my watch (27:05 official time) which was a super fast swim for me that rivals times I was posting in my professional triathlete days. I always tell my swimmers that the key to a fast swim is to sight properly, draft and have good fitness. All three contributed to this time. After a smooth T1, I was off on the bike. I felt good, I checked in on my heart rate, power and effort throughout, took my nutrition and watched the kms pass by. Focusing on what you can control and having patience was the strategy I used and what I find is most effective for long course events. I was all on my own, which was kind of lonely. Occasionally a super fast male would zoom by. No one I could have worked with on the bike. Athletes can gain a huge advantage by working with other athletes outside the 12m draft zone, but usually this doesn't happen when you are one of the first ones out of the water. I had two minor mechanicals (dropped chain), which forced me off my bike twice - which was annoying and I probably lost about 60-90s as I had to dismount my bike both times. I have since ordered new chain rings so that this issue doesn't happen in another race. The bike felt pretty easy the whole way, except maybe the last 20km on Burnel when I was afraid to go into my small ring so I had to grind a bit up some hills. Before long I was back in transition and ready for the run. (1:34:12 excluding the stops, and 1:35:50 race time). The run felt pretty easy for me and in control for the first 14km. Just like on the bike, I focused on what I could control: pace and nutrition. I was even chatting with the lead cyclist. It wasn't until the final 1/3 of the race after climbing the steep climb that I started to have to work. And, wow, it really hit me. Each step was a struggle, I let out a few tears, swore under my breath but I kept going. I saw the second female about 4km behind me and knew that I could win. I am involved in triathlon for myself, to push myself to be my best, to continue to improve, it's an outlet for which my personality thrives, but it's also nice to win! I tackled every uphill knowing that there was a downhill coming and that I was getting closer and closer to the finish. When I finally saw the finish line the tears started streaming down my face and I was smiling at the same time. Breaking the tape and holding that banner high (and not worrying about stopping my watch!) will be one of the moments I remember for the rest of my life. Run time: 1:35:57. 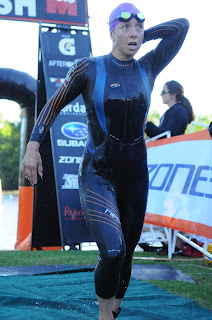 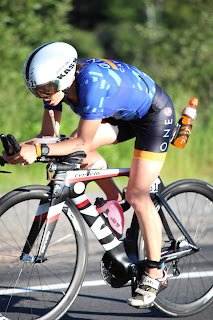 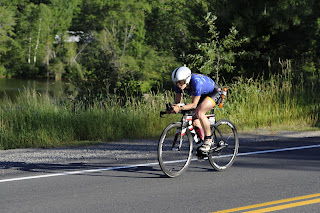 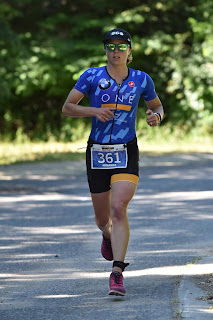 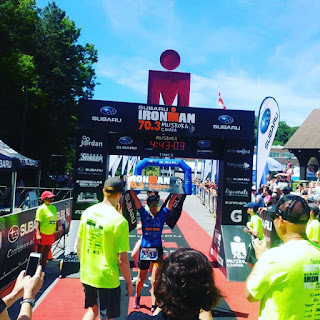 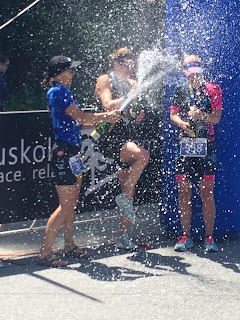 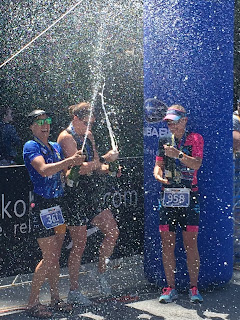 And of course, I want to post the amazing results by all my amazing Tomenson Performance & Wellness athletes:

Posted by Miranda Tomenson at 11:38 AM No comments: