Today is my last day in California. Although I am going to miss the sunny weather, the magnificent views, the outdoor pool, the warm temperatures, the beach and amazing outdoor riding, I am excited to see my friends and family (especially Maddy!) back in Toronto. I will be home only briefly, for some rest and recovery, before I embark on my next training adventure in Arizona!

The second week of training was as epic as the first. The biking was heavily emphasized on this camp over swimming and running. Having only really been cycling seriously since 2009 (a much shorter time than I have been swimming and running), so I was going for tons of bike volume over the past two weeks. I think that we accomplished that goal, as I totalled 1100km of cycling and 24000ft elevation gain! I did manage to fit in 8 hours of swimming, 6 hours of running and 2 hours of strength work on top of that, to ensure that I didn't become "just a cyclist!" :)

Some of the highlights of the second week of training:

1. Getting to join in with the Cycling Escapes group again on the Tuesday. Had great company on the bike with Peter - a lawyer/cyclist/runner from London!

2. Having a super nice swimmer lend me a pair of goggles when I forgot mine, which was followed by an amazing swim of all-out 50s free!

3. Realizing that I can climb STUNT in the same gear the entire way. STUNT is my favourite climb in the Santa Monica Mountains :)

5. Being in the USA after the women's hockey team won the gold medal game and the men's team advanced to play Sweden in the final. (Had lots of fun telling the cashier at the grocery store I was Canadian after those victories!)

8. Vanilla/coconut cake. A nice treat after a tough day of training!

9. Facetime. Don't know how I would have gotten through the week without it. It does get lonely training on your own.

Here are some photos of the second training week: 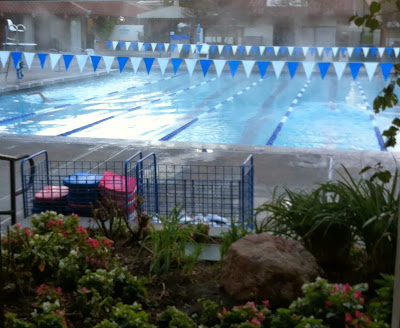 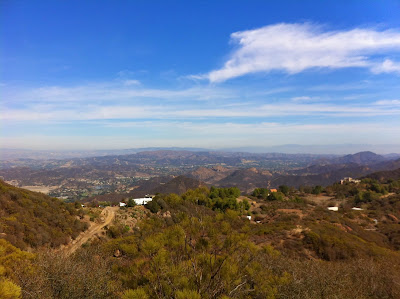 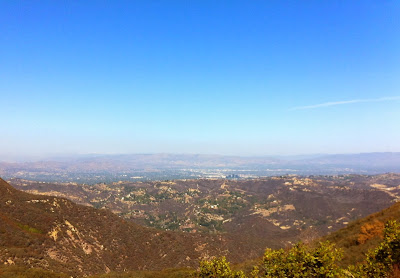 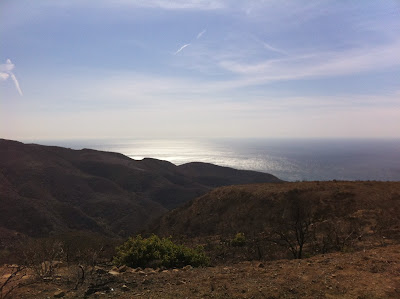 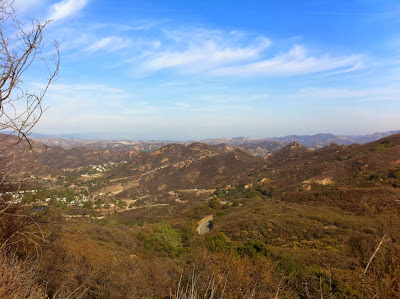 Posted by Miranda Tomenson at 9:39 AM No comments:

It has been amazing to be revisiting the Santa Monica Mountains and getting in some crazy mileage on the bike! Yesterday marked the end of my first week here, which included 6 days of training and 1 off day. In those 6 days of training I logged 24.5 hours on the bike, and the rest of the 32 hours I was running and swimming. To be honest, I didn't know what kind of shape I was in heading into this camp. I have been struggling with an injury that has left me on and off running for the past 3 months, has effected my bike training and, even interfered with my swimming a bit. So…when I arrived here I knew that I would have a lot of hard work ahead of me.

When I arrived last Sunday I quickly unpacked and settled in, and then headed out for a short brick workout just to loosen up the legs. It was my first time outside on my bike since Ironman last November and it felt GREAT! Not only was the fresh air a nice change, but the scenery and the smooth roads in the Agoura Hills area make it so conducive to riding. I pushed my 30 minute easy ride to 45 minutes and got re-aquainted with my bike. Even the run felt pretty good - perhaps the cold weather in Canada was what was keeping me injured! :)

The first week I was here I joined in with Cycling Escapes, to take part in their Santa Monica Mountains Climbing Camp. I had done this camp last year and LOVED it. It was appropriately challenging for me, and probably for anyone, as there are all types of cyclists with different abilities from around North America that attend. The first day of camp I got in a swim before my ride, then I was on my bike less than a half an hour later to meet the Cycling Escapes group for our first day of climbing. We rolled out of the parking lot together, towards the west side of the Mountains for an amazing first day. Our first climb was up Mulhullond, the famous "Rockstore" climb, that takes about 30 minutes. I was feeling pretty good, in fact, but I knew it was just the first day of five, so I held back the best I could in a group riding environment. The second climb of three that day was Yerbe Buena - my least favourite climb of the camp. The roads are bumpy, which is no fun when you are working hard and climbing. Then, after 50 minutes of climbing, you finally reach the top, but then you are literally vibrating as you start to descend down the windy roads - a bit scary and uncomfortable! Still satisfying once it's over, though. The third climb of the day was Decker, a steeper, but shorter climb on VERY smooth roads. My legs were definitely feeling it at this point and I was struggling. I arrived back at the hotel after a big 105km day of riding and finished it off with a short run. I was a mix of feelings at the end: exhaustion, hurt, but also feeling proud of accomplishing something. And this mix was something I hadn't experienced in a long time.

The second day of the camp we would tackle the east side of the Santa Monica Mountains. This included a long climb up Piuma, with absolutely amazing views of the ocean and then a climb up Topango Canyon and Fernwood. During the second climb I almost felt like I was back in Italy - with little villas lining the road that I climbed up. It was spectacular! The third day of the camp was a bit of a rest day, but we still tackled the Westlake climb (the steepest of the camp) and Latigo Canyon Climb (the longest climb of the camp)! However, these climbs were separated by a ride along the beach, which was a nice treat. At the end of Day 3 I was pretty tired and had already reached my biggest week of training in the new year, even though I was only 4 days into the week!

The fourth day of the camp was a 100 mile (160km) ride and my Garmin stats say 11,700ft of elevation gain! To head into this ride already exhausted from the previous few days was tough, not only physically, but mentally, also. I just wanted to survive! I took the climbs one at a time and I made it without feeling too tired! Highlights of the day included meeting some other strong cyclists who are local to the area and hearing about some other places to ride, the SAG being there at the top of every climb with food, water and encouragement, the awesome weather, beautiful views, pushing myself in the last 20km while riding with another member of our group, the climb up Encinal Canyon (my favourite climb of the camp!), actually finishing the day in one piece and, of course, all the food that I got to eat afterwards!

The fifth day of camp was another big day. I started with a 3200 yd swim - mostly arms only, then the last ride with the group - 91km and 6700ft of climbing and then a 4.5 mile run. The niggles started to come today: sore kneecap on my right side (likely due to tight quads), super tight calves, a bit of tightness in my left medial quad…Not surprising after my biggest training week on the bike, ever! So it was decided that I should take a complete day off training on Saturday.

All in all the camp was a great success:

1) More mileage than in last year's camp, because we got rained out the last two days in 2013.

2) All the climbs of the camp were faster by 3 to 8 minutes compared to 2013 - despite the fact that I had more training and fitness going into the camp last year.

3) I was not limited at all by the injury I have been battling for the past 3 months.

4) I am no longer scared, worried or hesitant about my 2014 season. Despite a rocky start to the year, it still has the potential to be my best season yet!

Next week, Adam has said that I am to repeat this past week in the upcoming week, but unsupported with the presence of other riders in a group and the SAG support vehicle. The goal: improve my times on all the climbs! Yikes. I will keep you posted on my progress and whether or not I can do it!

Also, thank you so so so much to Richard and Erica from Cycling Escapes for making this past week an unbelievable experience. You can find more information about the camp here.

Photos (sorry, not many, hopefully more next week): 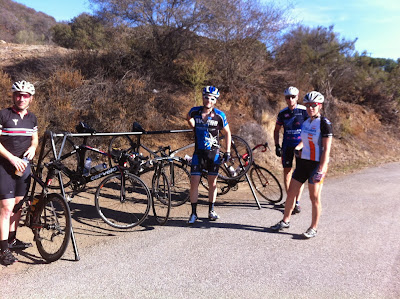 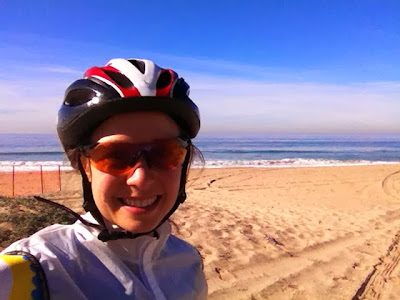 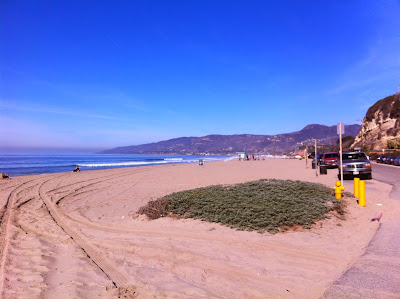 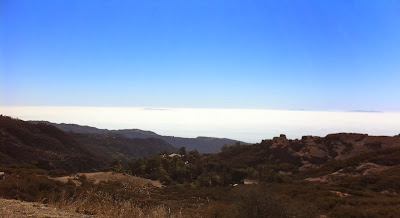 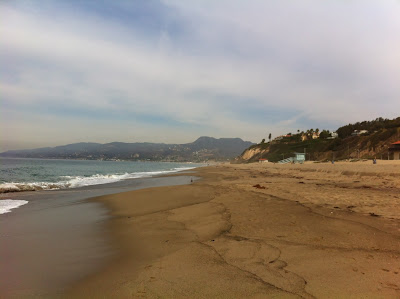 Posted by Miranda Tomenson at 12:20 PM No comments: