It's been awhile since I posted! The intention of writing more has been there, but the time hasn't. I thought I would re-start my commitment to the blog by posting a race report from Multisport Canada Gravenhurst Olympic Triathlon this past Saturday, July 14th.

As most of you know, I have taken a step back from training and racing this year. My training hours have dropped considerably, my racing schedule includes only 5 races this year. I've raced in the Guelph Sprint Relay, Welland Sprint, Gravenhurst Olympic and I have Bracebridge Olympic and Barrelman to come. While I expected this step back to effect my fitness, it hasn't been as detrimental as I thought. I am actually rested for my workouts and have been able to train at some higher intensities than I have in the past. The result has definitely been a positive one. Not only do I feel fit, but, overall I am less tired and have more energy than I have in the past. Although I didn't feel great on Saturday (possibly related to the 26 massages I gave and my average wake up time of 4:45am in the days prior!) I still had a PB on the course and was good validation that this new approach to training is working well for me. Following is a brief recap of the day in Gravenhurst.

Race morning I was up at 4:30am naturally. Apparently that is my new set wake up time! I went about my usual morning routine, including a 10 minute round of glute and core activation and low rep reverse lunges with weights. Four of us were heading to the race: me, Adam and Adam's boys. We quickly packed up the car and woke up the boys about 5 minutes before we were to leave (basically transported them from their beds to the van with their pillows and blankets). We were on the rode at 5:10am and arrived in Gravenhurst just before 7am. The fact that this race is close enough to allow me to sleep in my own bed and not wake up ridiculously early (by my standards) is a plus.

The boys and Adam dropped me off at transition. They headed to McDonalds for pancakes, while I set about checking in and setting up for the race. Just a side note to mention that the venue in Gravenhurst is great for families - it's close to quite a few restaurants, there is a basketball court and other such kid friendly amenities near by, like Kawartha Dairy Ice Cream. So, while the boys did their thing I could focus on myself. Warm up included a 15 minute easy ride with a few 30s pick ups and then a 15 minute run with some drills and strides. I usually warmup for 45-60 minutes for a Sprint, 30-40 minutes for an Olympic, 15-20 minutes before a half-ironman and about 10 minutes (swim only) before an Ironman. We all include a warm-up before the main set in our training sessions and it is just as important (if not more so) to include one prior to our races. 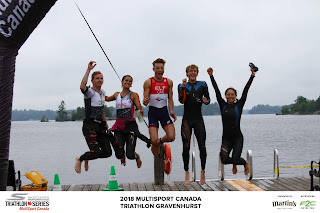 How the Pros warm up 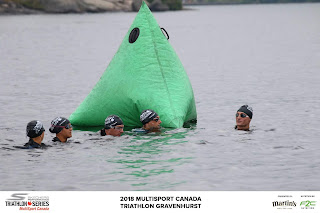 Before the swim start. No risk of getting punched today.

A highlight of the Gravenhurst Triathlon is the fact that you get taken out on a steamship and start the race offshore. It's about a 5ft high jump into the water and then you swim to the start line, line up and then start in waves like a usual race. The elite age groupers were sent out in a pontoon boat so that we could get to the start line a bit sooner and get in a bit of a warmup. This also gave me a chance to scout out the course, which has been known to cause many people to swim off course (not those who have done my Toronto Tri Club Open Water Swim Clinics or Cherry Beach Swims, of course). Unlike Welland (where I started with about 50-70 other people) there were only 5 of us at the start line in my wave. The horn went and we were off. Jesse and Marek took off quite fast at the start and I couldn't keep up to catch Marek's feet. So I swam on my own for the swim. Even with my good sighting technique, my distance vision seems to be getting worse and I found it a bit difficult to see the buoys. I used a white boathouse and the splashes of Marek and Jesse in front of me to help me navigate in the right direction. Once I was around the first turn buoy and headed back to shore, I used the white roof on the Island to sight and made sure I stayed well to the right of it (people tend to swim directly towards it and off course). In the last 500m I started gaining on Marek. I picked up my kick in the last 200m to get the blood flowing to my legs again and we exited the water together. I finished the swim about 11s faster than last year. 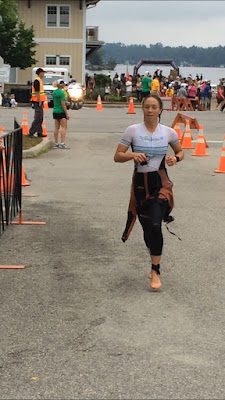 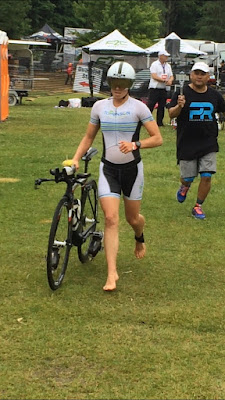 Heading off on my super fast bike and blade wheels

I had an easy T1, though I felt more tired than I expected, and was onto my bike comfortably. The first 4km of the ride I spent trying to get my watch to find my power meter. I got a new watch this week and I synced it to my power meter during my warm-up, but I guess it had unpaired while I was swimming. At one point I was pedalling with my arm extended and wrist by my crank arm to try to get the watch to pick up power! After realizing that I was only riding at a below average speed (34kph) already 4km into the race I gave up and decided to just ride by feel. The last 36km were a more respectable 36.9kph. This type of bike course suits me well: rolling hills, non-technical out and back. Also very well suited for beginners attempting their first Olympic Tri. I was pleased with my time, 15s slower than last year, but I think it would have been faster had I been more focused in the 4km instead of upright and trying to sync my watch to my power meter. 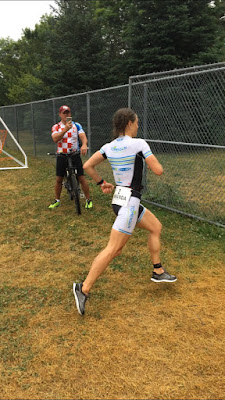 My goal for a 10km run off the bike in an Olympic Triathlon this year is to break 40 minutes. I've done it once (Orange County Triathlon in 2014). Unfortunately, that didn't happen in Gravenhurst. As soon as I started the run I felt flat. I'm not sure if that was the humidity or fatigue or what, but I didn't have the bounce that I've recently had in training and that I had in Welland. The sports drink I took during the ride seemed to be sloshing around in my stomach and my legs were heavy. The ups and downs and sharp turns on the course made it difficult to find a rhythm. When this happens I do my best to stay positive, I got energy from seeing the others and focused on what I could control - putting my best effort forward. Seeing my sister Sara with a huge smile in 5th female position was also a huge positive. She is amazing. Her other commitments limit her training time to less than 7 hours a week - but she works hard to get in her key sessions (even if it means doing them really early or really late at night). She is extremely talented and a fierce competitor, which usually means she lands on the podium in most of her races. With positive thoughts in my head I made it to the final kilometer, which is mostly downhill and finished strong. I was 1min7s faster than last year. All in all, the race was a PB on the course, so that's a great sign! 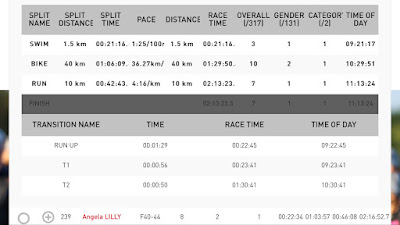 Race Stats
*My race is also on STRAVA 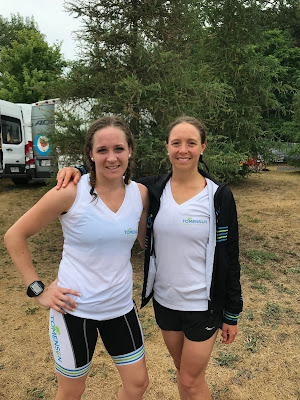 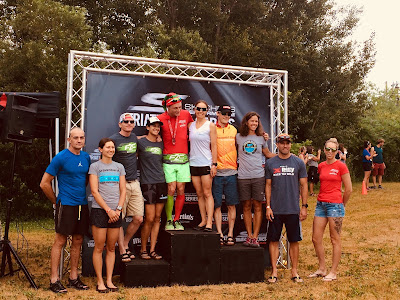 Me on the podium 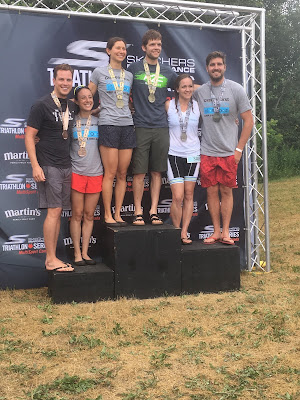 Sara on the podium 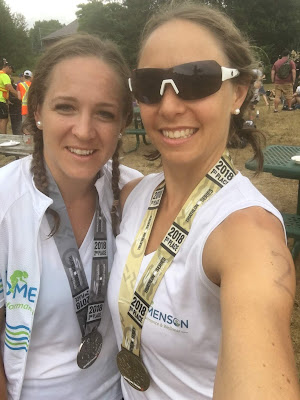 Showing off our medals! 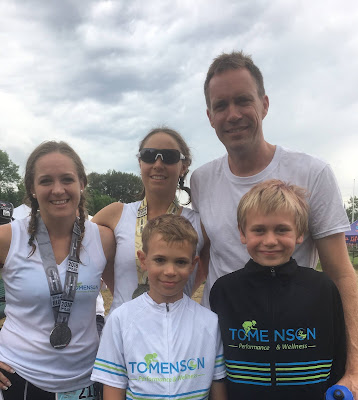 A special thank you to those who have stood by me from the start of my career as a professional athlete, through personal ups and downs, my knee surgery, and now, even as I take a small step back from racing:

- The Multisport crew, volunteers and Tri Ontario officials
- My parents for their continued love and support throughout this crazy adventure of mine.
- My sisters for being my inspiration to work hard and never give up.
- Adam for doing A LOT of driving, for keeping me calm when I get anxious and for making me want to be the best version of myself. It helps so much to have him there on race day (and the boys!)
- My health care team, especially Bill Wells (Chiro). A high stress life makes you more prone to injuries. I am so fortunate to have Bill and others keeping me healthy.
- All my readers for their support and for following me in my triathlon endeavours
- Fellow athletes at the race and training partners, especially Sara and everyone at Tomenson Performance, WattsUp and TTC!
- Endurosport for building me the perfect bike and all your mechanical help
- My sponsors: Title Sponsor:High Rock Capital Management, WattsUp Cycling, Blade Wheels, The Urban Athlete, Fitt1st Bike Fitting

Posted by Miranda Tomenson at 3:28 PM No comments: