What Swimming Taught Me About Life 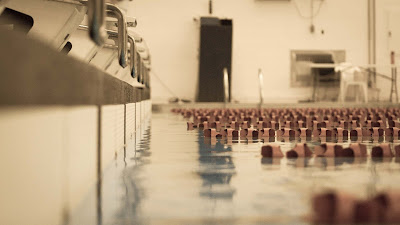 I started competitive swimming in grade 5. It all started when I tried out for my school swim team. I went to Allenby public school and we were lucky enough to have a pool. Yes, it was shorter than 25 yards and only 3 lanes wide, but that didn't matter. I still can't believe that simple structure would start me on a path that would define the rest of my life. I liked swimming on the school team so much that my parents enrolled me in the Granite Gators Novice Swim Team the following year. I was the oldest swimmer in the group, and that's probably why I was one of the fastest, and being one of the fastest was probably why I loved it back then. I sure wasn't the fastest forever, but I continue to love the sport. So, whatever the reason I swim, it was and has been enough to have kept me swimming at various levels of competition for 21 additional years and counting.

In this blog I will talk about some of the parallels between what I learned competitive swimming and how those lessons have helped me in the rest of life. Here they are, in no particular order: 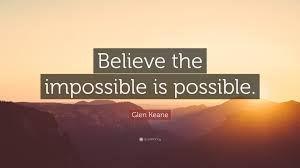 1. Sometimes the impossible is possible. It was February of 1998, the finals of the 200m breast stroke and my last chance to qualify for the Provincial Championships that year. I missed the standard by 0.02s during that race. The next night I had the 100m breast stroke, in which my previous best had me 4s away from the standard (a lot in a 100m event). I was much better at the 200m breast stroke and didn't think I would even come close. To a 12 year old, it seemed *impossible* to qualify in the 100m event. Yet, something magical happened in the finals that night and I swam a 1:26, 2s faster than the standard and 6s faster than my previous best time. That was the first time I remember experiencing what felt like *a miracle*. Since then, I have dared to dream big. I came 47/50 in my age group in the 2008 ITU World Champs, but I still dreamed of competing as a Pro Triathlete one day. Not only did I get to compete as a Pro triathlete, I came 23rd female overall in the 2013 70.3 World Championships. When I was stuck in a research job I hated, I dreamed of owning a Triathlon Coaching Business, even though I had zero business experience, only a bit of experience coaching, no knowledge of anatomy and I am an introvert to the extreme. Yet, after a lot more education, a lot of risk and a lot of I help, I have achieved my dream. And there have been other circumstances where I started from nothing, but had dreams of achieving something, and I've succeeded when other's didn't think I could. 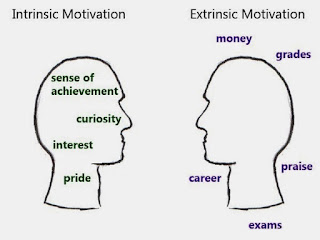 2. Don't be motivated by extrinsic factors. My Papa, who (along with my Mamma) I credit for a lot of my success in sport and in life, once did slip and motivated me with "If you break 3:00 in the 200m breast stroke, I'll get you a pager." Yes, I did break that 3 minute barrier and I did get my pager. However, usually when you are driven by external motivation, the reward is not all it's cracked up to be (a pager is really not that exciting!). After breaking that 3:00 barrier, I realized it wasn't the pager that made me happy it was the feeling of accomplishment that came from that achievement that did. And I have remembered that moving forward. It's not about the medal at the end of the race, it's about racing to the best of your ability. It's not about the money that you bring home from your career (although some money is necessary) it's about the positive effects you have by doing the work you do. It's not about the status of Professional Triathlete, it's about getting the experience of competing against the best girls in the world. It's not about improving your diet so you can look good in your outfit, it's about improving your diet to move freer and be happier in your own skin. So, look inward when you set goals, because that allows you to be truly rewarded.

3. When you get injured, keep moving. When you hit an obstacle, find a way around it. The only swimming injury I ever had was once in grade 8 or 9 and it hurt to move my arm above my head. I'm not sure what the injury was, but it meant that it hurt to swim. What did I do? For that whole week (or maybe two), during swim practice time, I ran for 1 hour and kicked with fins in the pool for the subsequent hour. I didn't just stay home and miss practice, I did the next best thing that I and my coach could come up with. When I returned to the pool I had lost some swim fitness, but not nearly as much as if I had not done any training at all. This taught me two things: if you hit roadblocks in your life then find a way around them, take the next best path, and eventually you will end up back on track. It also taught me that when I do have an injury, to keep moving. Movement is the best thing. Obviously, if you are run injured then don't go to 5x10 minute intervals at maximal sustained power, but a low intensity swim or low intensity ride will keep your fitness from dropping drastically, promote blood flow which helps heal injuries, load the tissue a little bit (to prevent scar tissue from forming) and lower stress levels which can promote healing. 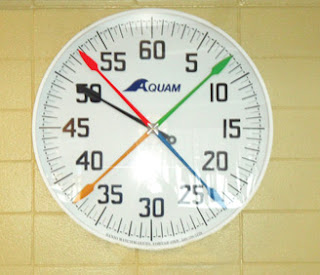 4. The pace clock teaches you to think quickly under pressure. There's nothing like swim sets like 30x100 on 1:25 pace time. You are swimming as fast as you can, have less than 5s of rest at the wall and are basically deprived of oxygen the whole time, yet you STILL have to count and perform simple addition. Oh, and swimming also teaches you short term memory. Because sometimes Coach says, "what was your time for each 100? And if you can't remember, you can do the set over again."

5. Pay attention to the details. Races are won or lost in 0.01s. If you take a breath too often or not often enough, if you mis-time your flip turn, if you take one stroke too many in a length it can make or break your dreams. This is something that holds true in life, too. A spelling mistake on a resume and it's unlikely you will get an interview for that job, one miscalculation or wrong decimal place on your tax return and you can owe a lot of money, one mis-step and you can slip on ice and break a bone. Swimming taught me that when I do something, I should do it as close to perfect as possible. It taught me to take the extra time to pay attention to the details. (I probably don't pay enough attention to the spelling and grammar in my blogs though!)

6. Hard work doesn't always mean you will be the best, but you should still work hard. When I was swimming as a teenager I had close to perfect attendance. I tried my hardest all the time and I didn't make excuses to get out of practice. I trained when I was sick, I trained when I was sad or mad, I trained when I wanted to be with my friends, I trained on my birthday. When I missed a practice for my grandmother's funeral, I made it up the next day on my own (with my sisters). I was one of the hardest working on the team. But it was apparent by the middle of high school that I would never be the best. I was just not given the swimming genetics to make me so. It was a hard lesson to learn as a kid. It was tough to know that just because you put the work in, it doesn't mean that you will achieve your dreams. However, working hard in the pool may not have made me the best swimmer, but it did teach me to work hard in life, because even if it doesn't mean I will be the best it will mean that I can be the best version of myself.

Of course there are so many more things swimming taught me, such as the importance of having goals, discipline (huge!), organization, be early or on time (you don't want to miss your race), failure to prepare means preparing to fail, respect your teammates, avoid drama, shave your legs regularly, don't do anything on a full stomach, etc. If you grew up in a highly competitive sport or club then I know you can relate to the above. And if you are raising kids, then I hope that he/she/they can find something he/she/they are passionate about and learn valuable lessons from their own journey.
Posted by Miranda Tomenson at 3:11 PM No comments:

This is the second part of a blog about useful swimming tips. Please see my previous post for more basic swim technique tips. Once you perfect your streamline, body position and front quadrant swimming you are ready to progress to more advanced concepts like hand entry, catch, pull and recovery.

Your hand should enter the water about a forearm's length in front of you and directly in front of your shoulders. It is a common mistake to enter the water with your hand too far in front or too close to your head. It is also very common for your hand to enter too narrow, so that it crosses over to the other side of your body. Keep your fingertips facing forward (don't enter the water thumb or pinky first) with a slight spread to your fingers (not tightly closed or widely spread). Lastly, upon hand entry, don't point your fingers upwards to the surface of the water, point them slightly angled toward the bottom of the pool. 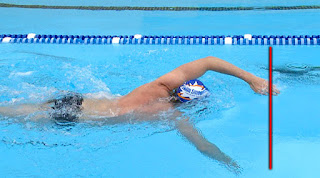 Notice where his hand enters the water 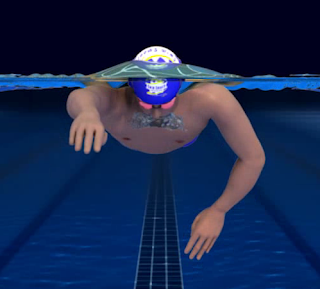 Notice that his hand enters in front of his shoulders 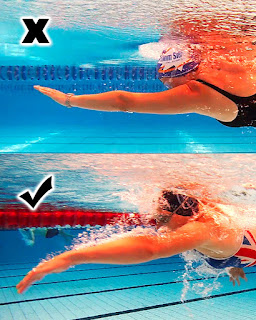 Make sure your hand doesn't reach toward the surface after hand entry, it should point slightly downward to set yourself up for a high elbow catch

A few useful drills/videos to help you practice hand entry are: salute drill and preventing the crossover

Your pull should direct the water straight back towards your feet and your finger tips point down toward the bottom of the pool (forget what you learned about an S-pull). A common mistake is to let your arm cross the center line of your body (especially when you breathe). Another common mistake is to pull the water too deep with a straight arm, so bend your arm at the elbow so that your hand passes about a forearm's depth beneath your body. 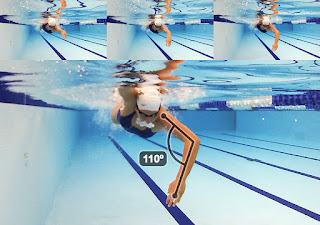 Pull the water straight back under your body, slight bend in the arm.

If you have shoulder problems and want to switch to a elbow driven recovery, a few drills to try are: finger tip drag drill/zipper drill, salute drill, slow motion recovery

This is the most difficult skill to grasp in freestyle and I recommend perfecting all the other aspects of your stroke before attempting to work on this.

Notice how his elbow stays high and it's his forearm that is pushing the water backwards
To start to learn the high elbow catch, I suggest a specific progression:

1. Practice the high elbow catch in the mirror

3. Practice on the side of the pool deck

5. Picture yourself swimming over a ladder that is parallel to the surface of the water and using your high elbow technique to pull yourself over top of it.

The next part of my swim technique posts will be an open water skills specific post. Stay tuned!
Posted by Miranda Tomenson at 7:03 PM No comments: