What a season! Let's start this post with a bit of a recap...After finishing school in June I didn't have much time to ramp up the training to be fit enough to compete in Calgary Ironman 70.3 on July 24th. Thanks to Nigel and his athletes from NRG I was able to do some really hard workouts to get my bike fitness up quickly. Unfortunately, at this time I also did too much running too soon and ended up with a run injury (sprained superior tib-fib). As a result, it was a tough battle to the finish line in Calgary, my first half-ironman post knee surgery. But really, I was happy that I was even able to race again! After Calgary I did some local Multisport races, still battling some nagging injuries that weren't enough (luckily) to keep me sidelined but enough that I didn't want to push the volume/intensity on the run. In September I competed in the Barrelman Half Ironman, in which I saw some the fitness and speed I had in 2013 come back. I didn't want to let this reclaimed fitness go to waste and I needed to validate my Elite/Pro status for 2017, so that prompted me to enter Ironman 70.3 Miami. I needed to finish within 12% of the female winner in order to compete as a Elite/Pro in 2017.

The training leading up to the Miami race was going very well. I nailed my key workouts, the highlight being a 115km ride with a normalized power of 172W (and two 35K intervals at a normalized power of 188W) and then a 17km aerobic run at a sub 4:40/km pace. I thought I should be able to at least hold around 185W on the bike and a <4:30/km pace in Miami. I was pumped for a solid day. But it was not to be. What started as a little bit of a sore throat turned into a gross cough about 1 week before race day. And I was diagnosed with an acute bronchitis (viral) on the Monday prior to the race. The doctor's orders were to take a week off training. Hah! Couldn't do that. I did decide I would take the rest of my taper SUPER easy. An off day the next day and then some shorter swims, bikes and runs in the days after, with the hope that I would be ok. I was much better on race day than the days leading up to it, but I still had a sore throat, chest congestion and a cough I couldn't shake. So, I decided I would just do the best I could. Power and run pace targets were thrown out the window and I would be going more by feel. I ended up finishing the race in 4:38, which was within 12% of the winner (with about 4 minutes to spare). So, by that standard, the race was a success! My goal had been accomplished.

The highlight of the swim might actually have been that salt water was very soothing on my throat! Well, that and it felt like a nice and steady swim. I didn't even notice the waves. I just followed the girl in front of me. It was only when I exited the water in 31+ minutes that I though that I may have either swum off course or the swim was long. I hoped it was the latter, because a tough swim means more time for me to get ahead of the strong bike/runners. I did come to a realization after that swim, that having swum for most of my life, I have a really good feel for the water, the currents, how to swim over and not through the waves. If I could give only one piece of advice to triathletes about swimming it's to stay relaxed and not to fight the water. 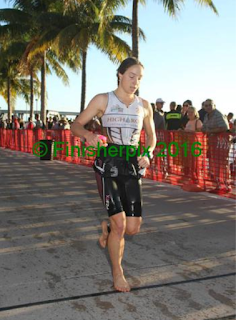 After having a very good bike in Barrelman, I was hoping for a similar experience in Miami. However, I knew it wasn't to be when I was struggling to get my power above 180W. My heart rate was in the 170s (it should be in the high 150s) and I knew that was a result of the chest congestion. So, I tried to make the ride about staying as aero as possible. I think I did a good job of that as I averaged 37kph at 175W normalized power. I had the 11 fastest bike of the 23 female pro women. In years past I had been among the slowest on the cycling leg so this was a nice improvement to see. 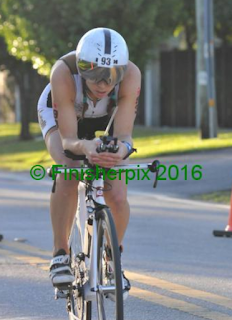 I felt pretty good for the first 10km of the run, but my heart rate was very high and I was having a hard time breathing. I would also have small coughing fits every so often. I knew the second half of the run would be a struggle. I was counting the time separating myself from the girls chasing me down. The gap was getting smaller and smaller. I was passed by 2 girls in the last 5km and struggled to maintain my pace. I hung on to a fairly decent run of 1:35:53 at a pace of 4:33/km. 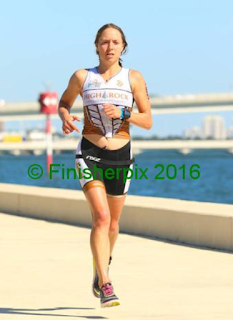 In the end, I'm very happy with my result. The illness definitely took it's toll, but I achieved my goal and saw some of my former fitness shine through the congestion :)

- My parents for their continued love and support throughout this crazy adventure of mine. They were there in Miami and are always there, always making me a priority when I need them. I am so lucky to have them. 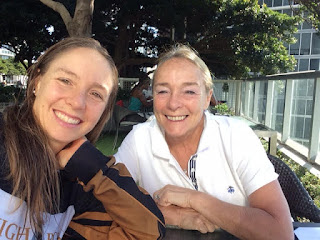 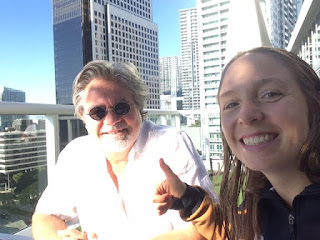 - My health care team of David Lamy (RMT), Michael Hong (Acupuncture) and Bill Wells from The Urban Athlete (Chiro).
- Adam, my coach and partner, and just a great guy in general.
- Saige, Rhys and Mack for inspiring me with their own athletic achievements in the week leading up to my race (Saige - Slow-pitch division champs, Rhys - 9th at xcountry while sick!, Mack - 25th at xcountry)
- All my readers for their support and for following me in my triathlon endeavours
- WTC & Miami Tri Events race organizers, staff and all the volunteers!
- Fellow athletes at the race and training partners, especially those at WattsUp and TTC!
- My other coaches: Kim and Nigel from NRG
- My sponsors: High Rock Capital Management, WattsUp Cycling, MultiSport Canada, The Urban Athlete, Fitt1st Bike Fitting

Posted by Miranda Tomenson at 9:11 PM No comments:

Where things are at!

Although I thought I was done racing after Barrelman, there was still part of me that wanted to use some of my re-gained fitness to tackle another race. Early in the year I had my sights set on Arizona Ironman, but there just hasn't been the time. Finishing school in May, studying for and writing my board writing exams in June, battling injuries in July, dealing with some ongoing legal issues, starting to work full time in August and helping to grow WattsUp has kept me much to stressed and busy to consider training for an Ironman! Each person only has a limit to how much stress they can handle, and that includes both life stress and training less. Basically, if life stress goes up, the training stress has to go down or you risk getting injured or overtrained. I have been walking a fine line here already. So, with Ironman off the table until next year (hopefully!) I decided to race Miami Ironman 70.3! 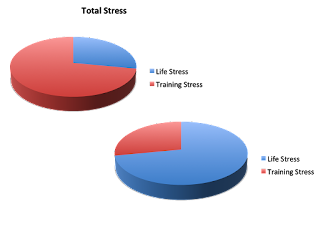 At this time of year it is incredibly hard to keep motivated. Many fellow competitors are finished for the season and enjoying some much needed rest. The same training feels monotonous and boring. I knew this would be the case and decided to mix up my training a little bit. Coupled with the need to avoid injury, I've done a lot of broken long runs and bikes. Sets like 3 to 4 times through a 10' bike - 15' run. That's a 1hr ride and 12km run, but way more fun! Also, I am running every other day, but include a couple of double run days...heard that is how Brett Sutton trained Nicola Spirig. For the swimming, I am doing a 4km swim once a week with KLSC and then 3-4 short swims. 2 of them with a 2km race pace or faster set (usually done after being motivated by my TTC swimmers). I have one race simulation day tomorrow that includes a 55km ride then 5.5km run, then 55km ride and an 11km run. Then I will take a really easy taper until race day. These new workouts have kept the training enjoyable.

What are my race predictions? My goal for this race is to hold the same power as Barrelman and to have a bit of a better run so that I can finish within 12% of the winner. Those are the requirements to race as a Pro next year. I have learned the hard way that having too lofty a goal only leads to injury. You can't put a timeline on your long term goals. The athletes that take baby steps toward success are the ones who have longevity in their sport. Despite what the movies and the media tell us, success takes time. 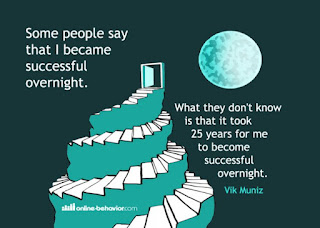 Posted by Miranda Tomenson at 10:41 AM No comments: