At the start of this season, my one goal was to gain experience racing as a professional. If I could learn what to work on in the next off-season, then I would consider this goal accomplished. This meant tackling a variety of different races with all different types of terrain, in different types of weather, so I could see how I would do relative to the competition in varying conditions. So far I have learned that my swim doesn't change much, regardless of the conditions. I am better in non-wetsuit, rough water conditions compared to my competitors, but I can swim in anything and still be one of the top out of the water. The bike is a bit different: Mooseman 70.3 I experienced a hilly, rainy and cold bike ride, Muskoka was hilly and cold, Timberman was rolling hills and cold, Rhode Island and Mont Tremblant were rolling hills and hot! I can only conclude that, since my best cycling was done in Mont Tremblant and Rhode Island, I am a hot weather cyclist who prefers rolling hills to steep climbs (for now, anyway!). The run: hands down I prefer a hilly run, hot or cold doesn't seem to matter. My top run splits relative to the field have been at Rhode Island 70.3 (3rd fastest run split) and Muskoka 70.3 (5th fastest run split). So I can say that even though my season isn't over yet I have learned what to work on during the off-season! Goal accomplished. However, it isn't always fun racing in conditions that you don't prefer (even if you are learning something), which brings me to my race report on the Muskoka 70.3.

The morning started off a little later than usual, we got to sleep in until 5:30am for an 8am race start. This was nice. I got to transition, set up my bike - although in this race I had way less room than usual. My bike was on the end of the rack and literally squeezed in between the poles that support the rack and the bike beside me. This would pose a problem in transition. The other problem of the day: it was COLD! 8 degrees Celcius cold! An extra few seconds of time in transition was not worrying me, but spending close to 3hrs on the bike in this temperature did. Nonetheless I continued on with my pre-race routine: swim tubing to activate the arms, swim warmup, some pick-ups in the water, then I lined up with the other Pros at the start line. This race we would start with the male Pros as well. 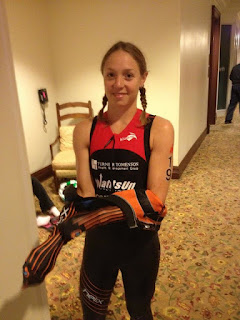 Getting my wetsuit on inside, nice and warm! 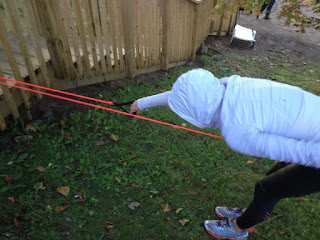 
Before I knew it the race had begun. Immediately from the start the group split into two - one group headed for the second buoy and the other headed for the first buoy, which seemed the longer route. I stuck with the group headed for the second buoy and before I knew it I had passed them all and was leading the pack. Damn - no feet for me to draft off of, but 10 people to draft off me. I was feeling pretty good though and ended up putting some distance between myself and the group behind me. When I got to the buoy before I knew we had to make a sharp right into the channel I stopped dead - I couldn't see any buoys in any direction (this might be a point in favour of my learning to wear contacts). So I stopped for about 10s - waited for the group behind me to catch up and followed them until I could see the next buoy. Then I passed them all again and exited the water a few seconds in front, instead of the 20s I would have had. I guess I learned that swim races that have buoys every 100m are preferable for my near-sightedness :) 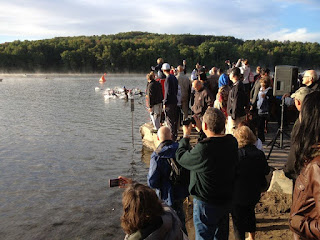 The start of the swim


The first transition involved a long run up a paved hill BAREFOOT. This was not too much fun, especially while wearing a wetsuit, but I quite like running up hills so I can't complain too much about this part. My bare feet did hurt a bit though. I got to my bike, put on a long sleeved shirt over my trisuit (thinking it might keep me warm), fiddled with my bike a bit to get it out of it's stuck position and then I was off. 4th woman out of the water and on her bike.

At the start of the bike race I was passed by Chantell Widney and Jennie Fletcher. Jennie beat me out of the water in Tremblant, so I guess my swim has improved somewhat since then. I'll take it! I stayed with them for the first part of the bike, but each steep climb they gained a little bit of time on me. Thanks to my speedy Cervelo I would make up some of that time on the descents, but that wasn't enough. Also, the body heat I generated from the swim and the uphill run were fading fast and I was getting cold. The shirt I was wearing protected me very little from the wind and without being able to keep my core temperature up, there was no hope for my legs getting warmed up either. Think about trying to make a fist when your hands and fingers are freezing cold...that's how my legs felt and they did not want to push on the pedals. Once I got on the Highway 35 and was riding in the sun I felt a little bit better and saw my power numbers climb, not nearly as high as in my training ride the week before though. That is frustrating! By the last 30km my legs were fried, I was still cold and could no longer feel my feet. I was just barely hanging on. Annie Gervais passed me in the last 4km on the bike and I moved into 8th female. I finished the bike about 5 minutes slower than when I did this course in 2010, even though I know my bike fitness is much better than it was back then. I think I will be doing some winter riding outdoors this year for cold acclimatization...or maybe they can build a cold chamber at WattsUp...they can really do anything and everything there.

I have never been so happy to arrive in T2 as I was during this race! I couldn't feel my feet and the thought of a hilly 21km run was not very welcoming, but the run was an opportunity to catch some of the girls ahead so I was going for it. The first km of the run was weird, because my feet were still completely numb, and I couldn't feel them at all! What an odd sensation. I had to be extremely careful not to trip and I did nearly fall a few times. The awesome part of this run was that Coach had his bike and he would ride up ahead of me, stop, and cheer me on as I passed. The run actually didn't feel as hilly as I remembered it from the practice runs I had done on the course the week before. I was holding about 4'00 - 4'20 per km so was roughly on pace for my goal time of 1'28. The last final stretch of uphill before the turnaround was challenging, but I saw 3 girls up ahead and within 2' of me so that definitely kept me going. Plus, I knew that super fast runner, Jennie Hansen, was right behind me and probably on pace for a 1'24 half-marathon. I really needed to push to stay ahead of her. After the turnaround at 10.5km it was downhill for a good 2km and Jennie Fletcher was in my sights. She was not easy to catch, but I passed her around the 15km mark and moved into 7th. Annie was about 1.5 mins further ahead of me and I was pushing hard. At 18km I started to give everything I had - but by the 20th km I had nothing. The last km was uphill and Jennie H. passed me with about 200m to go and beat my by about 20s (better than the 15 minutes she beat me by in Vegas last year, though!). I ended up 8th, with a 1:29 run split...not too far off my goal.

You may think I would have been disappointed with this after my podium finishes in Rhode Island and Tremblant, but I accomplished so much from this race that I can't even be disappointed for a second. The accomplishments from the race may not have included a podium finish, but the accomplishments did include learning my weaknesses and strengths, which will help me make the podium in the future. Most of my competitors are in their mid-30s and they didn't get where they are overnight or in one season. Most of them went through the process that I am going through right now. Hopefully I have the patience to stick with it, learn from every race, and someday get to be as fast as them.

There are a few people I want to specifically thank for being there for this race, in particular: Faye for her many words of encouragement (Faye completed her first Ironman yesterday only a year after her first ever triathlon!), Marty, Faye's family for letting me stay at their beautiful cottage while I trained on the Muskoka race course (and for teaching me how to shoot a potato gun), my parents for making the trip to Muskoka to cheer me on, my coach for his unwavering support (even when I'm yelling at him during the race), other spectators and athletes cheering for me during the race and through email, facebook, etc. (Dr. Kath, Mike, Tara Norton, Lesley from Cervelo) and of course, Rikki :)

Up next, Pocono Mountains 70.3! Another chance at a hilly and cold bike ride!
Posted by Miranda Tomenson at 7:59 AM 1 comment: