What can I say...2013 has been a rough year. A testament to the fact that even the most well thought out plan can be affected by uncontrollable circumstances. It started out with my getting the flu, derailing my plans for an epic training camp in the Santa Monica Mountains...and ended with a stomach bug, at my last Ironman 70.3 of the season, Augusta. Not to mention all the things in between: a bike crash in Italy, a broken arm in July, a flat tire in August...I have never been one to deal with unpredictable circumstances very well. After this season, I hope that I have gotten better at that.

My mom and I arrived in Augusta, Georgia on Wednesday. It was the typical pre-race routine: prep swims, prep bike workouts, prep runs. The workouts went well, other than a few close calls with some no-so-friendly dogs who thought I looked like a tasty meal. The only thing that was off was my stomach. I just wrote it off as pre-race nerves and didn't think too much of it...until the race. 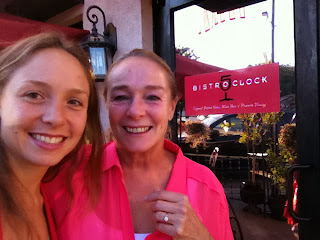 Pre-race with Mamma in Augusta 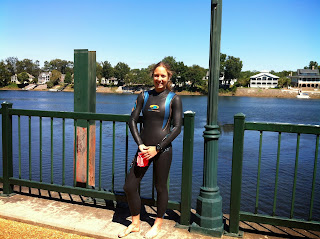 Before a practice swim 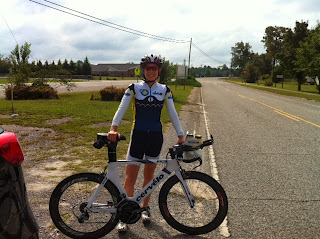 Pre-race ride on the course 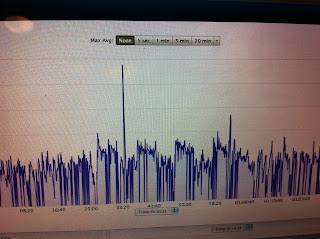 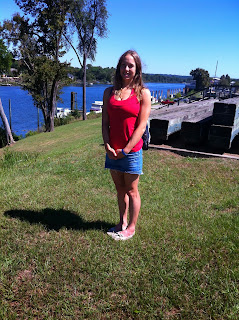 I was particularly excited for the start of the race. We would get to dive off a dock into the Savannah River, which was awesome. One of the things I have always wanted to do to start a triathlon is dive in. Maybe that's my competitive swim background? Anyway, they allowed us in the water to warm-up before the race and I was the first Pro to dive in and start warming up. I was pumped. I was excited for a great day of racing. The energy that I lacked in Vegas was full on for this race. I can't even say that I was really nervous. Yes, the usual butterflies were flapping around in my belly, but other than that I seemed a lot more calm then normal. 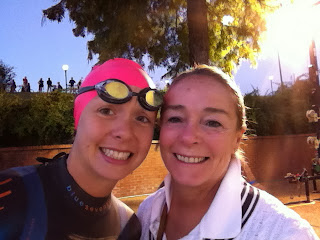 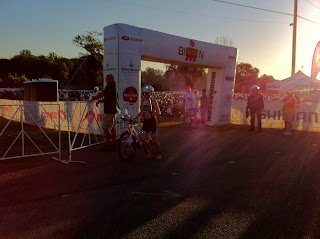 At 7:33, the Pro females were off, but the horn failed to sound, so we dove in at the officials saying "go, just go!" This was a bit strange, but off we went. I sprinted the first 100m and was actually leading the way at the start. What an awesome feeling! Knowing I couldn't maintain my pace for the whole swim, I looked to both sides of me and noticed another girl pulling ahead of me. I slipped in behind her, hoping to save some energy while maintaining a fast pace. Soon another girl came up beside me and we swam beside each other for a bit, before she passed me. At about the half-way mark I felt my stomach bothering me a bit. I thought maybe I had swallowed a bit of water, but it was effecting me enough that I slowed my pace and the girls got a bit ahead of me. The sun decided to rise at this time, making it quite difficult to sight. I had been in this situation in Steelhead though, and I knew that I just had to keep the sun spot just to the left of me. And since I had been counting the buoys and I knew how many there were (16), I knew when to turn into shore. I found the swim exit and saw the girls up ahead, only by 15 seconds. I exited the water in 3rd, followed closely by World 70.3 Champ, Melissa. We were all at our bikes at similar times. I had a good transition and was off just behind the other girls.

The bike started out exactly like Vegas. My bike computer was not picking up power, speed, cadence or heart rate. How frustrating! I knew what to do to fix it this time though, so within a couple minutes all was good again. I could see the 3rd place girl just ahead and I worked hard so that she wouldn't open the gap any more. However, by the 5th km into the bike my visor had completely fogged up. I couldn't see a thing! I tried to wipe the fog off from the inside and it flew off the helmet. I debated stopping and getting it as it was brand new! But I didn't and kept riding. I really noticed the difference in having a visor versus not. Maybe it was just psychological, but I swear that I felt the loss of aerodynamics as the wind whipped against my face with no visor to streamline the air around my head. OK, so a bad start to the ride. That was OK. I knew that Melissa and Emma-Kate Lidbury were far down the rode, but the 3rd place girl was just 100m up ahead and I focused on not letting that gap get wider. I was happy with the way my legs were feeling, happy with my power output and heart rate. But I noticed that whenever I took a sip of my eLoad drink, my stomach would ache. This is unusual, as eLoad has been the only drink in the past to not make my stomach turn. Then I tried a gel, and that was even worse. Also very unusual. I felt like I was going to puke. Something was not right. My stomach felt weak throughout the ride, but I would only feel nauseous after taking in fuel so pushed on. At around the 30km mark two other girls had caught up to me. We rode together for a bit, and I made sure that they didn't get away. But my legs had stopped feeling so good at this point and my stomach was not feeling great either. I pushed through, but a little bit more cautiously than I should have, given that I knew I could hold higher power than that. With 20km to go I was in 7th and this was not good enough. I had worked to hard and endured to much to let myself fall that far back. So I pushed hard for that last 20km and ended up finishing the bike in 5th. I was happy entering transition and it was great to see multiple paralympic swim champion, Lantz Lamback, there to cheer me in! However, I knew my nutrition intake had been compromised: only 3 gels and 1000mL of eLoad. Much too little.

I did feel OK at the start of the run. I was confident in my run fitness going into this race. I had done a couple of 32km long runs, so I knew I had the endurance for a strong half-marathon off the bike. And for the first 10km I was doing great! The run course was such so that my mom was able to cheer me on every couple of kms! It was so motivating to see her smiling face cheering me on. And it was only when I took in nutrition that my stomach bothered me, but it felt much better than on the bike. After 10km, I was holding 4'10/km average pace at my target heart rate. But slowly things started to deteriorate. My legs just wouldn't turnover at the pace I wanted and my stomach was hurting more and more with each passing km. With 5km to go I was passed and I just didn't have the energy to respond. I finished in 6th position, which is still a strong placing for me in a tough field. After the race, it was evident that I had some sort of stomach bug. For about 4 hours after the race I was sick :( Luckily, I was able to tolerate food again (and wine) by 6pm, so I had some calamari and pinot grigio to celebrate the end of the season.

For the next 8 weeks, I have been banished to St. George, where I will be building up a solid base of training (and hopefully some good karma) for my season in 2014! Stay tuned for details of my adventures :)

Posted by Miranda Tomenson at 1:25 PM