Let's start this race report with a flashback to Kingston in 2012: I'm training full time, living with my parents, I have just started coaching triathlon and I work a couple times a week at WattsUp. Life is not busy. Basically I eat, train, do a bit of work, sleep and repeat! A lifestyle that is ideal for a pro triathlete. While I worked hard for my win that year, I didn't appreciate it as much as my win in Kingston this year. In stark contrast to 2012, the week leading up to Kingston 2017 involved 25hrs of giving massages, 16hrs of coaching, time spent running errands, cooking meals, cleaning, making lunches, paying bills, etc. Life is quite different now than it was back then. Yet, I've somehow learned to adapt. With proper planning, positive thinking and a strong will I am able to compete at the same level. That's what makes me the most proud about my performance on the weekend. Two of my favourite quotes are "don't wait for the storm to pass, learn how to dance in the rain" and "an athlete must persist with hope in her heart and dreams in her head" ... which I interpret to mean that no matter what life throws at you, you've got to press on and make the most of the hand you've been dealt and don't find excuses. 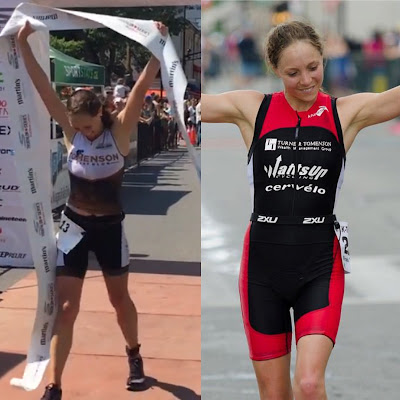 I did my usual prep bike-run on the Saturday morning. Loops around High Park were a great setting to get in a mix of hills, flats, race pace work and to test that my bike was in good working order. Then a short run off the bike with some accelerations got the legs feeling loose. We left Toronto at 10am, I had my McDonalds coffee and muffin in hand, and we headed to the 401 to endure the long drive to Kingston. Not much excitement on this drive: stop, go, repeat, Bulk Barn pit stop, go, stop, etc. After 4.5hrs we were at the race site...right on the water, in the heart of downtown Kingston. A perfect spot for a race. Lots for the spectators to do, while the athletes are racing. Then it was time to check in to the hotel. I had a meal I had pre-made of pasta alfredo with chicken and Adam got his standard pizza. We were asleep before 9pm.

The swim course was changed at the last minute due to the fact that the waves past the break wall were pretty high. So, it would involve doing two loops of a large triangle. However, this swim was challenging. The waves were high and the skies were grey, making it difficult to sight the triangular buoys that were about 300m apart. Luckily for me, I do really well in big waves for some reason. I am not phased at all by the chop. The first loop I sighted based on the splashes in front of me, likely coming from speedy Angela Quick, Alex and other fast swimmers. Knowing that I wouldn't have them to sight in the second loop I matched up markers in the distant horizon that I could use to sight during my second loop. That worked well and I swam relatively straight. And, lucky for me, I was passed by a relay swimmer at after cornering the last buoy was able to stay on her feet. I rode her waves for the last 500m of the race, and likely made up a bit of time that way. When I came out of the water only 75s back of Angela I knew I had a good swim (normally I'm 2min or more behind at this distance). 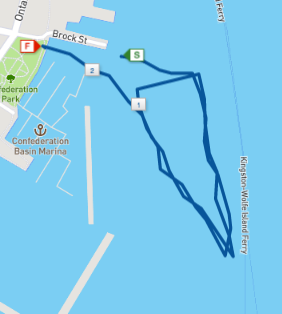 I wasn't fresh for this race after a busy week and a hard block of Ironman training that concluded last Saturday with a hard 5hr ride and 2hr run off the bike (in the heat!). I really didn't know how I would feel on the bike on race day. I knew that late ride fatigue was definitely possible. The bike did start out well. I was right at goal power and heart rate to the turnaround. I enjoyed the scenery and the rolling hills and the strong tailwind. Then, just after the 30km mark, the switch happened. I went from "push push" mode to "just hang on" mode. Every pedal stroke felt like a struggle. Luckily I have an incredibly fast bike and super fast Blade carbon wheels so I used this free speed to my advantage, but I was still slowing. Although I was upset that the last 20km were a struggle, it wasn't completely unexpected. I was physically and mentally tired.

I started out the run feeling good. This surprised me given how I had felt on the bike just minutes earlier. I was holding about a 4:05/km pace and felt like I was running strong. When I reached 4km on the run I heard that I was 1:55 back of the leader. Shoot. I knew I would have my work cut out for me. By the turnaround point I had cut that to 30s, but I was starting to hurt. I pushed through 1km at a time, and at around 12km in, I took the lead. I used the energy of the sprint racers around me and forced myself to keep up the pace. When I crossed the line I was so happy to finish as the top female! It was a hard fought battle. 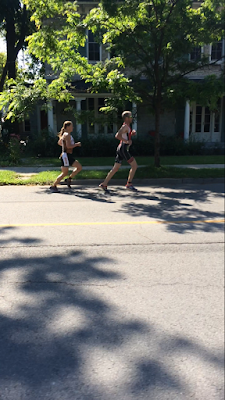 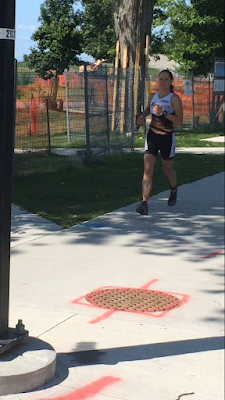 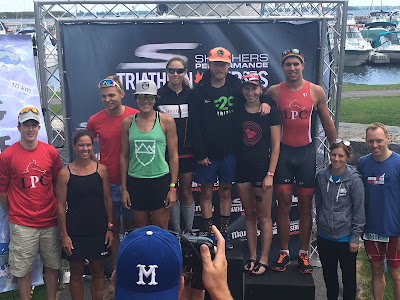 Next race up: Ironman Mont Tremblant then Lakeside Olympic Triathlon

- The Multisport crew, volunteers and officials
- High Rock Capital Management, my title sponsor. Check out the video about what they do
- My parents for their continued love and support throughout this crazy adventure of mine.
- My sisters for being my inspiration to work hard and never give up.
- Adam for doing A LOT of driving, for keeping me calm when I get anxious and for making me want to be the best version of myself. It helps so much to have him there on race day.
- Paula Van Nostrand for my new aero water bottle!
- My health care team of Dr. Mark Schofield, David Lamy (RMT), Bill Wells (Chiro) and Michael Hong (Acupuncture). A high stress life makes you more prone to injuries. I am so fortunate to have these guys!
- All my readers for their support and for following me in my triathlon endeavours
- Fellow athletes at the race and training partners, especially Sara and everyone at WattsUp and TTC!
- Endurosport for building me the perfect bike and all your mechanical help
- My sponsors: Title Sponsor:High Rock Capital Management, WattsUp Cycling, MultiSport Canada, Blade Wheels, The Urban Athlete, Fitt1st Bike Fitting

Posted by Miranda Tomenson at 12:51 PM