The past weekend I competed in Multisport Canada/Rev3 Barrelman triathlon. After a busy summer of racing, I knew that I was a bit tired for this one. It was one of those days where lots went wrong, but I maintained a positive attitude throughout the race and held on to finish 4th women, 3rd Pro and defend my title of Ontario Long Course Provincial Champion!

The first thing I want to say is that Barrelman is an amazing event that is held at a fantastic venue! The Flatwater Center in Welland is the perfect spot for an open water swim. Beginners will love the calm water and the buoy line underneath the water to sight from. Even experienced swimmers like a nice smooth swim. There is also TONS of room for spectators to cheer on the triathletes. You really do get a boost running from the swim to the bike with all the cheering fans. The bike course is flat and fast! Don't worry, there are enough turns so that it doesn't get boring - there is no stretch of road that seems to go on forever. The bike course is broken into two sections: the loop out and back from the Flatwater Center, then the final stretch from the Flatwater center to Niagara Falls. This makes the time go by pretty quick. When you arrive in T2 after the bike, the volunteers tell you exactly where your run gear is. The two transition zones make people nervous, but the race crew and volunteers have this very well organized. The run is a bit of a beast! It is one of the most challenging half-ironman runs, with almost 400ft of elevation gain, a few steep sections and false flats. The highlights are that it is two loops, which is great for spectators, and that you get to run right by the falls. Not only is it held at a great location, but the race crew, the volunteers, Steve Fleck (the announcer) put on such a great day. Barrelman truly is a fantastic experience.

A little bit about my race:

The Pre-Race: I have been having trouble with my Di2 shifting on my bike, with the battery dying after only about 400-500km (I've been told they should last about 10,000hrs). Sure enough, after making sure my Di2 battery was fully charged on Saturday, I woke up on Sunday to the battery completely dead. Luckily enough I do have a spare battery (that was fully charged) so I switched them out (quite the process, as the battery is stored in the frame of the bike). We were about 15 minutes late getting on the road. Next stop was for a coffee and muffin and, of course, our usual spot was closed for some reason. Not a great start to the morning! We did end up making it on time to Welland for registration (we had to check in race day, because Adam was racing Centurion the day prior). It was an uneventful time from then on. I racked my bike, set up transition and then did my swim warmup.

The Swim: I started the swim right on the buoy line, which was great. So, when the gun went off, I put my head down and just followed the line. Unfortunately, this meant I missed catching a pack of fast swimmers that started far to my left. It's hard to know whether I could have swum with them or not, but because I hadn't made that front pack I was swimming solo for the whole swim. I did feel good though! I've been doing a lot of pull paddles work since Ironman and I could feel the strength in my back and arms during this swim. At one point I let my mind wander and lost the buoy line. I looked up and noticed I was way to the left of the course! Oops. I got back on track and eventually I found myself at the swim exit, about 2 minutes or so behind the female leader, and super strong swimmer, Sheila. I was happy with my swim :)

The Bike: After a relatively fast transition, I headed out onto the bike course. Legs were feeling good, headspace was good, but my front aerobar shifters didn't want to work :( I was cursing electronic shifting at that point! I fiddled with the junction box a bit and they started working again, but they were sporadic the entire race. Sometimes they worked and sometimes they didn't. Luckily I could still shift from my bullhorns, but I would have to break aero to do so. Even with this issue I was able to catch and pass Sheila and finish the bike as the lead female. I may have biked too hard. My heart rate was higher than it should have been, but my legs felt good. I didn't know whether to go by feel or by my physiology...so, I went by feel. This may have been a mistake I would pay for on the run.

The Run: I started the run, and, within the first few strides, I knew it was going to be a struggle. This seems to be the theme this year in my longer distance races. Is it fatigue from spending about 30-40hrs on my feet each week? Is it that I'm biking too hard? Is it poor nutrition? Is it just lack of fitness? Am I still tired from Ironman 4 weeks ago? I have struggled this year on the run and I don't know what I am doing wrong in comparison to previous years. Anyway, I focused on running at a steady heart rate. I knew I could sustain a 165-169bpm heart rate for 1hr40mins so I just focused on staying in that zone, regardless of whether the pace was slow (which it was!). When Sheila passed me I was happy for her, she looked so strong! Next I was passed by Jennie Hansen, who I have so much respect for. She went through countless surgeries in the past few years and is back to competing and stronger than ever. Yes, I was upset that I wasn't running faster. But, yes, I was running as fast as I could. So, I stayed positive and, one step at a time, I made it through two loops of the gruelling course. I even re-passed Sheila in the last 3km of the run. I finished 4th female, 1st Ontario female. I had nothing left at the end. I even started hyperventilating after I crossed the finish line, reminiscent of a similar experience I had after my first ever 100m breast stroke race when I was 11.

What's next for me? I may do one more race this year. Then, next year, I plan to take a break from long course racing and race a few of the races on the Multisport circuit (I'd love to be able to do Barrelman again). Working 4 jobs and trying to train for longer triathlons really took a toll on me this past year. When I can work less, and train more, that's when I plan to tackle the long course events again. Competing in Kona is still my dream. Sometimes, the reality is that you have to put your dreams on hold. 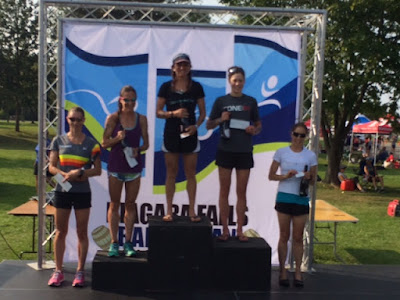 - The Multisport crew, volunteers and Tri Ontario officials
- High Rock Capital Management, my title sponsor. Check out the video about what they do
- My parents for their continued love and support throughout this crazy adventure of mine.
- My sisters for being my inspiration to work hard and never give up.
- Adam for coaching me again!
- My health care team of Dr. Mark Schofield, David Lamy (RMT), Bill Wells (Chiro) and Michael Hong (Acupuncture). A high stress life makes you more prone to injuries. I am so fortunate to have these guys!
- All my readers for their support and for following me in my triathlon endeavours
- Fellow athletes at the race and training partners, especially Sara and everyone at WattsUp and TTC!
- Endurosport for building me the perfect bike and all your mechanical help
- My sponsors: Title Sponsor:High Rock Capital Management, WattsUp Cycling, MultiSport Canada, Blade Wheels, The Urban Athlete, Fitt1st Bike Fitting

Posted by Miranda Tomenson at 3:17 PM