Three years ago, I completed my first Ironman, self-coached, and this year, I completed my second with the help of a professional coach (Miranda Tomenson). I finished this most recent race over 2 hours or 13% faster. I believe that the Tremblant course this year was easier than the Muskoka course years ago, but not that much easier. I credit my massive improvement to working with a coach. I felt much more confident going into the race this year, and, even if things had went south during the race, I still would have considered the season a success.

I believe that the benefit of a coach comes from having an objective view of how training is progressing. It’s hard to maintain perspective when training yourself and working towards a goal, but, a coach has the ability to view things impartially and plan as necessary. These benefits can easily be viewed by comparing graphs that show my training across the two seasons.

When training for my first Ironman, I never felt like I was doing too much training, there were probably times that I felt like I wasn’t doing enough. This year, there were definitely times when I felt like I wasn’t doing enough. Yet, I trusted my coach, and trained 3 hours/week less than I had three years ago. Yet, I came out of this training stronger than I was during that first Ironman. I have no doubt that without a coach, I would have once again tried to do more. I completely understand the logic behind the less-is-more philosophy, and I completely agree with it. Understanding and believing a philosophy are totally different than applying that philosophy to oneself.

It’s also worth noting in 2015 I had planned to do a lot more than I actually did (the light grey at the top of the bars). This season, after getting sick in January and March, my coach decided to dial things back and focus on keeping me healthy so that I could perform at the best of my ability. The result was that I can only remember missing one workout in the 4.5 months leading up to my race. When I reflect back on 2015, I remember being tired on many summer weekends and having weak excuses for missing long training days. Because I was healthy this year, I didn’t even think about trying to get out of tough workouts. In fact, I felt healthy enough that I wanted to get the workouts in, regardless of the conditions outdoors. This is in contrast to previous years where rain or bad heat would lead me to skip parts or all of big training days. 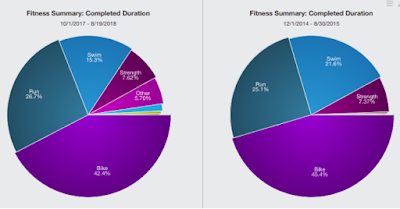 For all intents and purposes biking, running and strength training took the same percentage of my training time this year as they did in 2015. Swimming however took up less time and the remaining 5% of my time was replaced with stretching. The strength program I was doing this year was much more tailored to what I needed than the plan taken from a book that I was following in 2015. I think the personalized strength training, plus the focus on keeping everything loose through stretching is what has kept me injury free since November. That’s the longest injury free stretch that I’ve had in my 7 years in this sport (and it would have been even longer if I had spent more time paying attention to my equipment). Managing to keep me injury free also contributed to my ability to execute all my key sessions and contributed to my success. Having a knowledgeable coach (plus a good chiropractor) allowed me to know what I needed to do to be ready for my sessions. Once again, this is not something I would have been able to do on my own.

The other interesting thing this chart shows is that I spent less of my training time swimming, yet, my Ironman swim time improved by 9 minutes, in lakes which I remember being equally calm. When training myself, I always felt that there was plenty of literature out there that could help the self-coached athlete improve as a cyclist and runner, but, nothing I read (and I read a lot) ever helped me with swimming. I think there’s still tonnes of room for improvement in my swim, but, I would not have gotten this far without the help of a coach.

This year my Ironman marathon was 90 minutes faster than it was three years ago. I would be reticent to not comment on how a coach helped my run training. The first thing to notice is that I ran 5km/week less this year. If you remove the ramp-up weeks at the start of this season (I didn’t have those in 2015), that drops to 3km/week. Again, the less-is-more philosophy at play.

If you look at all above charts together, it turns out that in 2015 my average run training pace was 6:00 min/km and this year it was 6:15/km. What that means is that this year, I ran less, at a slower pace, and still managed to run the marathon faster. This is something that I wouldn’t have had the confidence to do on my own.

I don’t look much at TSS and IF throughout the year, but, I believe that TSS and IF are good metrics for comparing two workouts. As with the previous charts, this just goes to show I trained less at a lower intensity, and the results have spoken for themselves. Back in 2015, my bike training was focused for a good portion of the year on increasing my FTP. That meant high TSS and high IF. I was scared this year that I wasn’t spending enough time working on those things, but, once again, I trusted my coach, and, things all worked out.

Before diving into these charts, I need to note that I don’t particularly like how TrainingPeaks presents CTL/ATL/TSB. I think that CTL shows how much training stress is being carried over long period of time, however, I don’t agree with equating CTL with fitness. One day off results in a drop in CTL of over 1%, and I refuse to believe that one day off training decreases fitness. Similarly, ATL shows how much training stress is being carried over a short term, but, equating it to fatigue seems wrong. If ATL = CTL, am I really that fatigued. When I think of fatigue, I think more of TSB. If I’ve done more recently that I have over the long term, I’m fatigued, but, if I’ve tapered, then I’m fresh.

With that in mind, let’s consider these charts. In 2015, when I started training, I felt like I “only” had 9 months left, and I got right to it. The result was a CTL that climbed very quickly, but put me in a hole (the very low TSB). This time around, I had somebody who knew how to train for an Ironman guiding me and the CTL climbed much more gradually, without putting me into any real holes. Having somebody who knows what needs to be done when makes training so much easier than letting yourself get into panic mode and going hard right away.

Another thing to notice is that I hit my peak CTL in May 2015, and then I spent the summer doing less and less, probably making myself less race ready. This year I hit my peak CTL three weeks before the race. In fact, CTL/ATL/TSB were the same the day before both races. To me, that means, compared to my potential, I was at the same place before races. However, when I was coaching myself, it means I spent February through July training with more stress than I really needed to. It’s not reflected in those numbers, but, the fatigue incurred during those 6 months could not have been helpful. Again, having a coach who can build you to your potential without pushing too far is a huge benefit.

All of that being said, if you want a coach to help you improve, you need to have a coach that you trust implicitly. I mentioned a few times that I felt like I wasn’t doing enough, but, I trusted my coach implicitly. Part of that trust was built by working together since 2016 over shorter distances. I’ve learned to be confident enough expressing how I’m feeling and we communicate as necessary (and by that I mean, we talk daily if necessary, not that we wait until something goes wrong). The other part of trusting in the coach comes from figuring out if they will fit before you start working with the coach. I knew after the 3rd race in my 1st season that I would need a coach if I wanted to progress and that’s when I slowly started looking. First it took me time to figure out exactly what I wanted out of a coach, and then, it was a slow process of finding what was out there and getting as much information about the coach as possible. I think I looked into five or six coaches, e-mailed directly with two and only spoke to one. I would have spoken to more, but, from the conversation we had, I knew that this person was going to be able to provide what I thought I needed to succeed (and so far, I think I have been right). It’s also important to continually reflect upon what you need from a coach, as that will change with time, and not be scared to tell your coach when things change. Early in my relationship with my coach, I kept things to myself, but, as time as went on and we’ve learned how to communicate, I’ve been able to express what I feel like I need, and, I think that has only helped me improve as an athlete.

Posted by Miranda Tomenson at 3:09 PM